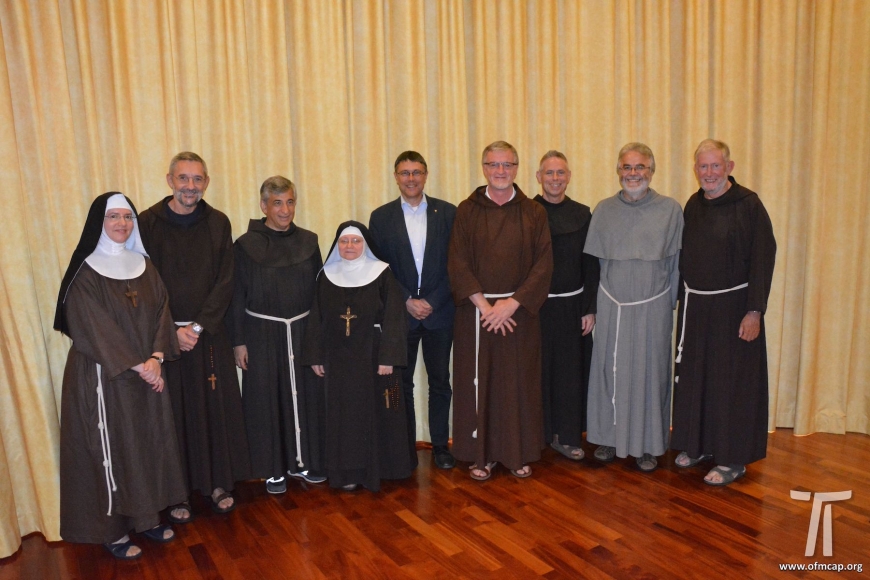 Rome, September 13. The Chapter is moving towards its final moments. Yesterday, September 12, the friars gathered after lunch in the Collegio garden for the group photo. They were also joined for lunch by the American Capuchin Cardinal, Br. Seán Patrick O’Malley, Archbishop of Boston, who, after participating in the meeting of the Council of Cardinals at the Vatican, wished to greet the brother capitulars.

Today saw other visits to the Chapter. Br. Michael Anthony Perry, General Minister of the OFM, visited in the late morning. In his remarks he recalled the collaboration of the Franciscan family in many areas. There were also visits from Br. Tadeusz Świątkowski, a General Councilor of the OFM Conv., Tibor Kauser, General Minister of the Secular Franciscan Order, and Sr. Maria Assunta Bertone, the President of the Federation of Italian Capuchin Poor Clares, who thanked the capitulars for the spiritual assistance the nuns receive from the Capuchin friars and urged a continued collaboration, especially in their formation. These visitors from the different branches of the Franciscan family participated in a discussion with the capitulars, who received satisfying replies to their questions on a variety of topics.

In the morning, before these visits, the assembly of the capitulars voted on some proposals of the Commission for the Ratio formationis. The four proposals were approved by a broad majority.

Tomorrow will be a big day, when the capitulars are received in audience by Pope Francis.