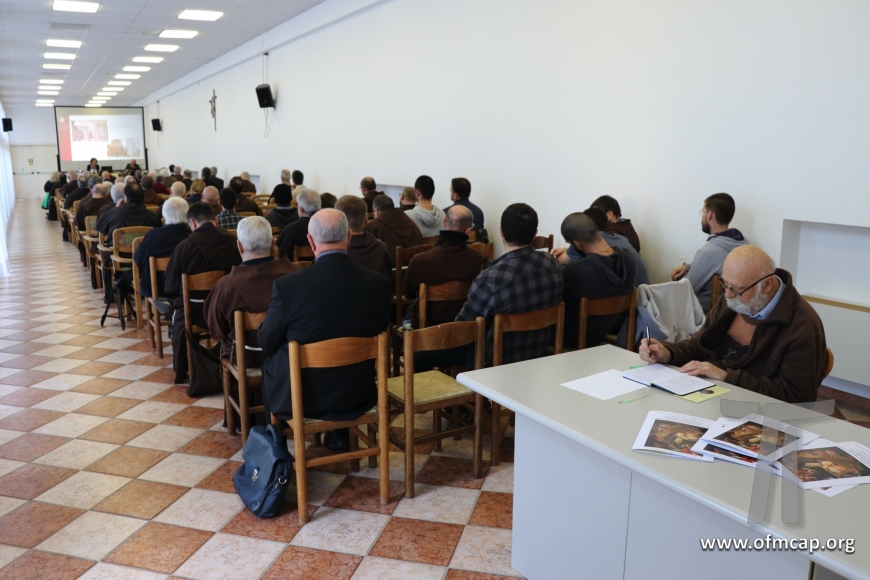 Taking its place among the celebrations for the Laurentian Year – the fourth centenary of the death of the Capuchin saint (Circular Letter of the General Minister Br. Mauro Jöhri, July 21 2018) – an interna-tional study conference was held in Venice from October 17-19, 2019 under the title: "San Lorenzo da Brindisi, ‘Doctor Apostolicus’ in Europe Between the Sixteenth and Seventeenth Centuries".

Historic Venice was where the young Lawrence first got to know the Capuchins, and eventually chose to enter the Order; it was also a place where he lived during different stages of his life. Here were hosted the many speakers and participants of the conference, who had the opportunity to appreciate the unique and evocative beauty of the friary complex from the smaller original friary (c. 1540) to the much larger addition (c. 1595), as well as the Church of the Most Holy Redeemer (built by The Most Serene Republic of Venice as a votive offering for deliverance from a major outbreak of the plague, and consecrated in 1592), the library, the cloisters, the garden and the enchanting lagoon.

The scholarly committee of the convention was composed of the Capuchin confreres Br. Gabriele In-generi, former member of the Historical Institute in Rome and now director of the Capuchin Provin-cial Library of Trento, Br. Vincenzo Criscuolo, general relator for the Congregation for the Causes of Saints and known for his historical works, and Br. Alessandro Carollo, current prefect of the “Lauren-tianum” inter-provincial theologate in Venice.

Participation in the conference was notable: around twenty speakers from Italy and Europe, with dis-tinguished guests, such as the Patriarch of Venice His Beatitude Most Rev. Francesco Moraglia, the Am-bassador of Hungary to the Holy See His Excellency, Mr. Eduard Habsburg-Lothringen (descendant of the imperial family of the Habsburgs, who had frequent and friendly contacts with the saint of Brindi-si), the Provincial Minister of Venice Br. Roberto Tadiello, and the General Councilor Br. Francesco Ne-ri, representing the General Minister Br. Roberto Genuin, who was not able to attend. All the Provin-cial Ministers of the Italian Capuchin Conference (CIMPCap) gathered in Venice for their annual as-sembly were present at the conference as well, along with the students and some professors from the theologate. Also in attendance were the young friars from the inter-provincial postulancy program at Lendinara (Rovigo), accompanied by their formators, numerous other Capuchin friars, as well as in-terested scholars and lay people from all over Italy. In total, for each of the days of the conference, more than one hundred people were in attendance. Most of them were housed at the friary (Convento SS.mo Redentore).

The talks, of highly admirable scholarly content (you can review the detailed list below), covered vari-ous areas concerning the life and holiness of St. Lawrence of Brindisi. After offering a portrayal of the historical and religious framework of Europe during the period of Catholic and Protestant Refor-mation, some of the commentary that followed examined in depth the interactions of the saint from Brindisi with Christians, Jews and reigning monarchs of the time. Particular attention was given to the spread of the Capuchin Order across the Alps, as promoted by St. Lawrence; especially in Austria and Bohemia, highlighting both his way of governing and his activity as a preacher and polemist, as well as his influence on popular devotion, especially in Spain. The theological content explored some of his most important works: the Mariale (his collection of Mariological sermons), the Explanatio in Genesim (commentary to the first eleven chapters of Genesis, beginning from the texts in Hebrew, Greek and Latin, while keeping in mind the rabbinic tradition) and a curious youthful short work on the symbolic meaning of biblical numbers, the De numeris amorosis. The conference ended with an overview of the saint’s canonization process and his iconography.

Thanks to the scholars’ contributions, it was possible to reconstruct a "three-dimensional" image of the holy Doctor of the Church, who’s importance is only matched by how little he is known outside of academic circles: a devoted expert in ancient languages (Hebrew, Greek, Aramaic), a preacher of Latin, Italian and German to the capitals of Europe at the time, a man of prodigious memory, a preacher and exegete, a prolific theologian and writer (his Opera Omnia in versions of 12 volumes and 15 volumes was published by the Capuchins of Venice between 1928 and 1956 in view of his proclamation as a Doctor of the Church), a man of government in the Order (Provincial and Commissioner in different Italian and European Provinces, Minister General and Definitor General), diplomat and ambassador, defender of the poor, mystic of the Eucharist, a pilgrim on the roads of Europe and, above all, a humble friar and son of Francis of Assisi. St. Lawrence is an excellent witness of the vitality of the Capuchin charism in the church and in today's world.

Other initiatives were provided by the organizers, such as a guided tour of the friary and church, an exhibition with a selection of his autograph manuscripts (the Mariale and the Explanatio in Genesim) and of other objects belonging to him, and a concert with music by composers Claudio Monteverdi and Girolamo Frescobaldi among others, also featuring two hymns dedicated to Saint Lawrence by Br. Mariano Miolli on texts by Br. Fedele da Zara, both Capuchins.

Finally, on behalf of the scholarly committee, Br. Gabriele Ingegneri solicited cheerful accolades from the participants, and assured everyone that the acts of the conference would soon be published for wider dissemination of the expert presentations.

View the complete photo gallery of the conference:

More in this category: « A Gift for Sister Mother Earth Jubilee of Damietta in France »