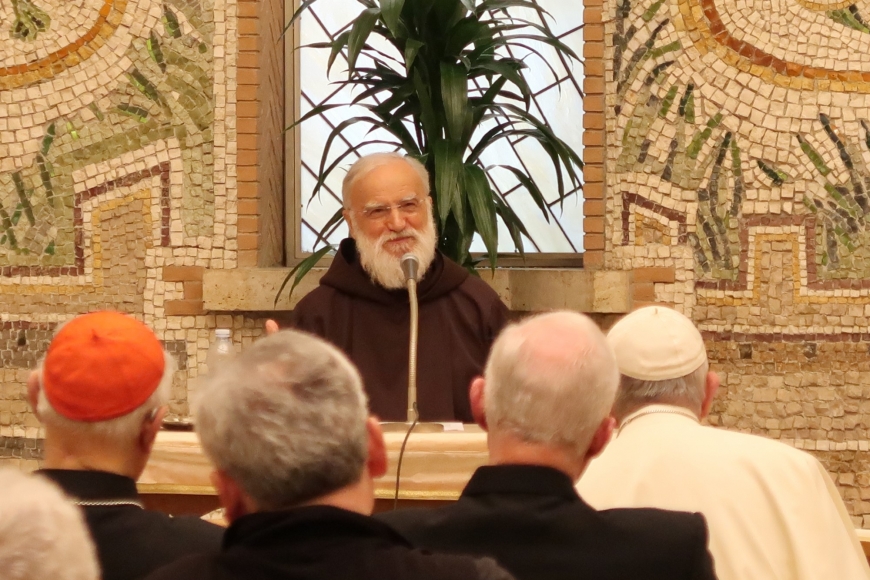 One cannot “fly without wings”. Paraphrasing Dante Alighieri, Br. Raniero Cantalamessa, in this interview with “L’Osservatore Romano”, explains the theme “They found the child with Mary his mother (Mt 2:11)”, taken from the three sermons given on December 6th, the First Friday of Advent in the Vatican, at Redemptoris Mater Chapel in the presence of the Pope.

Why the decision to dedicate the sermons to the Mother of God?

It was from the time of St. John Paul II, precisely following his encyclical Redemptoris Mater. I was not devoting cycles of sermons to the Mother of God, but it seemed to me that the time had come to put Mary back at the center of our periods of reflection in the chapel that was once called the Matilde chapel and now, just after that encyclical, is called Redemptoris Mater. But there are also other deeper reasons. The ecumenical climate in which we live and which motivates so many initiatives of Francis allows us to make the Mother of God a factor of unity and no longer of division between Christians of different denominations. In my sermons I strive to shed light on that essential core of the cult of Mary which unites all believers in Christ. This focal point consists of speaking of Mary starting from Scripture and from the dogma of the Council of Ephesus of 431, which proclaimed her “Mother of God” (Theotokos). This title contains all the greatness of Mary and the justification of her cult. In the Redemptoris Mater, St. John Paul II insists particularly on the title of Mary as “the first believer”, she who “walked by faith” and is now “our Mother in faith”. A way of speaking of Mary that our protestant brothers and sisters cannot fail to feel comfortable with in their own spirituality.

How can we complete our life’s journey accompanied by Mary?

The Advent liturgy prepares us for Christmas through three figures, Isaiah, John the Baptist and Mary; the prophet who from afar announced the birth of Emmanuel, the precursor who pointed him out to the world as the Lamb of God, and the Mother who carried him in her womb. Mary is unique in that she did not so much celebrate Advent, but lived it in her flesh. Like any pregnant woman, and for her in a unique way, she knows what it means to be “expecting”. Her gaze was directed more inward than to the outside, and in this she is the living icon of a contemplative Church. In the commotion of unbridled consumerism that now characterizes our time, Mary silently reminds the world that there is no Christmas without Jesus, and that the Christmas prepared in the secularized West is a feast without a birthday boy, and therefore a sad celebration. The faces of people on the day after Christmas are living proof that it’s not material things that bring happiness to the human being. With Jesus, even the smallest gifts add joy to joy; without him, created things are “cracked cisterns that do not hold the water,” as the prophet Jeremiah would say.

What was Mary’s role in the birth of the Church?

Vatican II pulled together an unbroken tradition, particularly vibrant in the Latin Church, by proclaiming Mary as the “image of the Church”. The Fathers taught that what is said of Mary is universally true of the Church and of the soul’s individually. Other images with which this intimate relationship is expressed are Mary as “first cell of the Church” or “the Church in her nascent state” and even still, as “mirror of the Church”.

Is Advent a Marian time?

At the center of Advent, as with any time of the liturgical year, there is Christ as a mediator between God and man. Advent is a Christological and a Trinitarian time, but it is also Mariological in the sense that the mystery of the Incarnation that is at the center of this time has been realized in her. Even the Word of God, who leads us during this time of Advent and Christmas sees her almost always as a main character. Mary, said St. Bernard, is "the door through which God entered the world and is now the door through which we can enter unto God". Whosoever desires a grace and does not resort to her - says our Dante Alighieri - is a dreamer who “wants to fly without wings”.