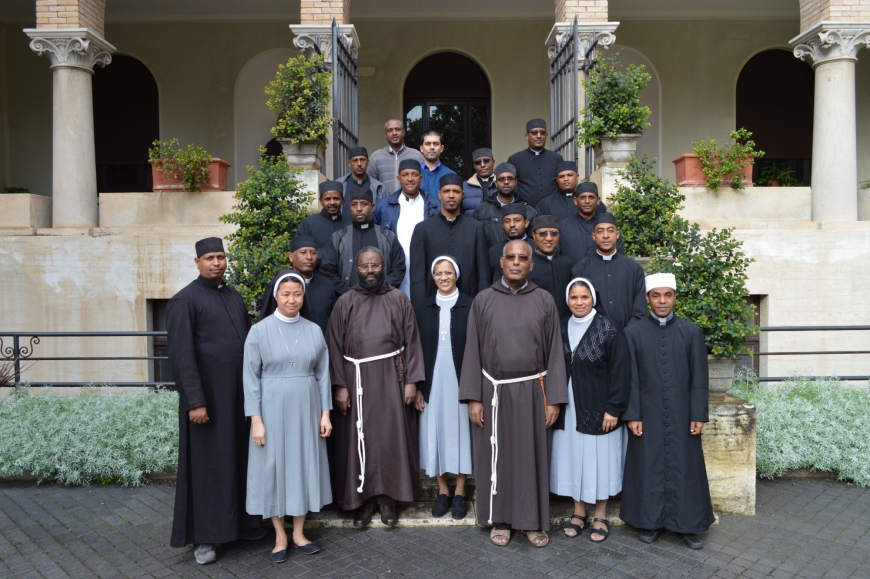 Vatican
Interview with the rector of the Pontifical Ethiopian College. In the shadow of St. Peter’s
L’Osservatore Romano

One hundred years of life. The celebrations for the centenary of the foundation of the Pontifical Ethiopian college began in the early afternoon of Friday, January 10th in Rome at the Pontifical Oriental Institute.

The celebrations - which were attended by all the bishops of Ethiopia and Eritrea - took place in the Vatican on the morning of Saturday, January 11th, when the members of the college were received in audience by Pope Francis. In the afternoon, still at the Vatican in the church of St. Stephen of the  Abyssinians, the solemn prayer of Vespers from the Liturgy of the Hours took place. On the following day, Morning Prayer was sung at the same location.

Interview with the rector of the Pontifical Ethiopian College
In the shadow of St. Peter’s

The Pontifical Ethiopian College - the only formative institution of its kind within the Vatican walls - is a place of knowledge, of communion and of bonding between the Churches in Ethiopia and Eritrea and the Universal Church.

Thus explained Eritrean Capuchin friar Abba Heilemikael Beraki during this interview with “Osservatore Romano”; he’s been rector of the Institute since 2019, which at this time is celebrating the centenary of its foundation.

How do you explain the presence of the Pontifical Ethiopian College inside the Vatican?

The explanation can be found in the attitude that the pontiffs had toward us, particularly Benedict XV and Pius XI. After the signing of the Lateran Treaty, the colleges that were inside the Vatican walls were moved to the city of Rome. Due to the pontiffs' preference and privilege, we stayed here. There was already a hostel for Abyssinian pilgrims as early as 1481. It was located behind the apse of the basilica, next to the church dedicated, in fact, to St. Stephen of the Abyssinians. Benedict XV converted the hostel, which in 1919 allowed for the opening of the college. His successor, Pius XI, then inherited it and enhanced it. In 1930, he had a new building built in the Vatican Gardens, which is what we currently know as the Pontifical Ethiopian College.

What kind of students do you host?

From 1919 until 1970, young seminarians were hosted who came from Eritrea and Ethiopia. They attended high school courses, and then philosophy and theology in Roman universities. Once ordained priests they returned to their respective countries to carry out pastoral service. Since 1970, however, seminarians are no longer hosted, but only priests. The intent is for training in different universities for obtaining various licenses or degrees. Generally they are diocesan priests of the Eastern rite from Ethiopia and Eritrea. They are not religious.

But you are a consecrated person.

We have to take a moment to remember the history of the college. It was born from an initiative of two Capuchin missionaries returning from Eritrea. Their names were Fr. Francesco da Offeio and Fr. Angelo da Ronciglione. In the 1920’s,  the two would frequent the hostel of St. Stephen of the Abyssinians, which at that time was the formation house for the Discalced Trinitarians. They had asked the friars to host one of their former students from the Keren seminary who had come to Rome to continue studies in preparation for the priesthood. Entering the hostel, they saw some tombs of our fellow countrymen, upon which came the idea of a college. They asked Benedict XV for the privilege of making these premises available to Eritrean seminarians. Then they contacted a person of influence, the Jesuit Camillo Beccari, who spoke with the Pope and gave him their letter. They also wrote to the first apostolic vicar in Eritrea, Monsignor Camillo Carrara, former provincial minister of the Capuchins of Lombardy.

Thus was born the link with the Capuchin friars minor?

The inception of the college came from those two Capuchin missionaries, and so the management was entrusted to our order. In fact, from 1919 to 1970 Capuchins of different nationalities ran the college. From 1970 to 1999 the Cistercian monks took over. Then, from 1999 to 2003, a priest from Addis Ababa. The Vincentians followed from 2003 to 2012. Since 2012, the management has been entrusted to the Capuchin Friars of Eritrea and Ethiopia. The college falls within the jurisdiction of the Congregation for the Eastern Churches.

How important is it for the Church in your country?

The college is vitally important, because here the priests who will be the leaders of the people are formed – the "teachers" who will lead the local Church. Some students will probably become bishops someday. Over the years, eleven have studied in the college and then received episcopal ordination. In 1930, the first native bishop of Ethiopia and Eritrea, Monsignor Kidanè-Maryam Cassà, of the Archeparchy of Asmara, was ordained in our chapel. Coming here the priests are formed with an open mind and a broad horizon. They know different realities not only within the Catholic Church, but also in other churches, especially Orthodox. Some of our students attend the Pontifical Oriental Institute, where there are students from all over the world. They are Catholics, but also Orthodox, and as such can compare their differences while uniting in brotherhood.

How many students are you currently hosting?

Twenty-one, including fourteen Ethiopians and seven Eritreans. I, the rector, am Eritrean while the vice rector is Ethiopian. We also have three Indian nuns who help us run the house. They belong to the Congregation of the Little Flower of Bethany. That "little flower" has now become large, and the nuns number about a thousand scattered all over the world. We have three employees who help us in the kitchen and with cleaning. The college can accommodate up to 25 students, and has some guest rooms as well.

What did you do before being appointed rector?

I was a friar in Eritrea and I continue as one even here. For many years I have been a youth director in the Capuchin province of Asmara. I then became provincial secretary for 15 years, and then was elected provincial minister -- a position I held for 6 years. At the end of the term, I was called to Rome and was assigned to Garbatella, where there is a small convent adjacent to the Capuchin Poor Clares monastery. For four years I was superior of the house and chaplain of the monastery.

More in this category: « Letters from the General Minister Franciscan Saints »