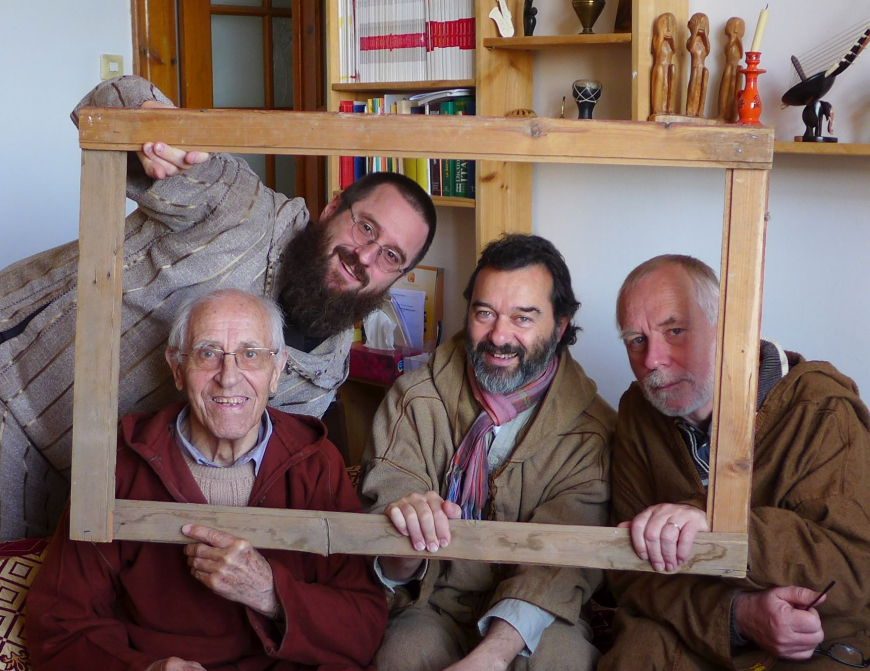 A Capuchin Friary in Algeria

A decision of the 2006 elective chapter of the Province of France led to the foundation of the Capuchin friary of Tiaret. Two brothers, Dominique Lebon and Hubert Lebouquin, had visited Algeria following the 2005 Madrid conference on secularization in Europe and also after the meeting of Catalan brothers. They submitted their report to the 2006 chapter, and it was approved by a large majority.  These two brothers were joined by Brother René and they came to Tiaret where the bishop at that time felt they could truly flourish: an intuition since confirmed.  Brother Mariusz, from the Polish province of Krakow, came to join the brothers in 2013.   Brother Dominique returned to France after 10 years of presence and Brother Pascal arrived in 2017.

Our fraternal life is lived in Franciscan simplicity in the town of Tiaret, located in the “Haux Plateaux” (or Highlands), on the borders of Oran.  We do the housework ourselves, assisted by a part-time housekeeper who also cleans the parish community’s building. Together with Brother Mariusz, we are responsible for the parish of Sainte Madeleine, Tiaret, which mainly welcomes sub-Saharan students (about twenty) and some Algerian Christians.

We have an oratory for our community and personal prayer life, as well as a multipurpose hall for Sunday and festive celebrations, on Saturday afternoons and on feast days.

Our economic life is assured by what can be described as a “subsistence income” (as Pope Francis encourages) paid monthly by the diocese to each active brother and comes to about 100 euros each (21,000 Algerian dinars). It is supplemented by our retired brother René’s monthly pension, by the province paying for social insurance and various donations. The sharing, in addition to the ordinary maintenance, is directed towards the Algerian persons in difficulty, the Province and investments in the tools necessary for the mission.

The brothers are aware that their primary witness lies in the manner of their lives together. And they cultivate this “being in relationship with one another” with the help of the traditional tools of Capuchin life: regular celebration of the local chapter, a simple liturgy steeped in the silence of prayer, co-responsibility for the management of the house.

They are not overloaded with work nor do they consider hospitality as a peripheral element of their life: it is central and testifies to the Life they welcome in the silence of prayer and fraternal sharing.

A benevolent and gratuitous presence among our Muslim brothers and sisters

Our relationship with the Algerian world is contingent upon the current limitations imposed by the country: it is forbidden to work without a work visa (employment by an authorized foreign company is permitted); the official religion of the Algerian state is Islam; as a tiny minority, the Christian presence in general, and the Catholic presence in particular, is constantly under surveillance and depends on residence cards and other official documents. This brings us back to the first rule of St Francis. Indeed, we try to remain “humble and submissive to all” without losing our dignity. We say that we are Christians. When necessary and “is pleasing to God”, we say more. It happens that Algerians come to speak to us about God and an experience of Christ, often experienced in a dream or a miracle. We are there for them too. The accompaniment of those whom Christ calls is part of the mission of the Church in this country and is becoming a more and more frequent aspect of our presence.

There is nothing special to so much do as to be here – disarmed, and open and ready for the long haul, learning the language of the country (languages are local Arabic and Kabyle, as well as standard Arabic).

Urgent appeals and a vital need

What is the situation of the Church in Algeria? And how can the Capuchin charism respond to these challenges?

In Algeria, a fragile Church

The world we live in is marked by a long tradition of Islamization. Social relationships respect a separation between the public and the private; with women dominating the latter and, generally men only occupying the former. This reality, however, is bringing about change in public administration in schools and in health care.

The Catholic Church bears the marks of French colonial history: its buildings, the way of doing things and its references are undeniably European.  The contribution of permanent members of African congregations and above all the living and dynamic presence of sub-Saharan students of all Christian backgrounds has provoked a renewal of this Church.  Christian expatriates working in foreign companies or embassies also contribute to a beautiful diversity.

The challenges of the new millennium

This mission in Algeria is inseparable from the current global context in which we live. It too faces the most difficult contemporary challenges of our world.

The main challenge facing the life of our local church is that of migration. Even if the city of Tiaret is not on the direct route of sub-Saharan migrants going to Europe, Oran is at the forefront of all trafficking related to this phenomenon. Many of our parishioners are deprived of liberty, detained in Algerian prisons for reasons ranging from drug trafficking to falsification of documents, from fraud to counterfeiting. Just under 80 permanent members of the Algerian Church, including two Capuchins, visit these prisoners throughout the territory. This mission is one of the simplest for our Church, and the one which has the greatest impact on the Algerian administration.

Migrants are also the object of special attention through various projects of Caritas Algeria, in which one of our brothers is very involved: the Women’s Garden, in Oran; The Pierre Claverie Center, first port of call for migrants on arrival and a support to the network of Migrant Aid. But above all, we see ourselves as a Church of migrants!

Competing religions, or believers who recognize themselves?

Interreligious dialogue is obviously a major concern of our mission. By changing our perspective and being on this side of the Mediterranean, we are gaining insight into the so-called «clash of civilizations» as well as the various movements against plurality at work in Europe and in the world. For us, it is about engaging in patient, and less spectacular, search for a true inclusive civilizational renaissance. “Believers,” Pope Francis admonishes, “must receive peace together and live the beatitude of the peacemakers.”

More in this category: « New General Councilor Put Jesus in the Center! »