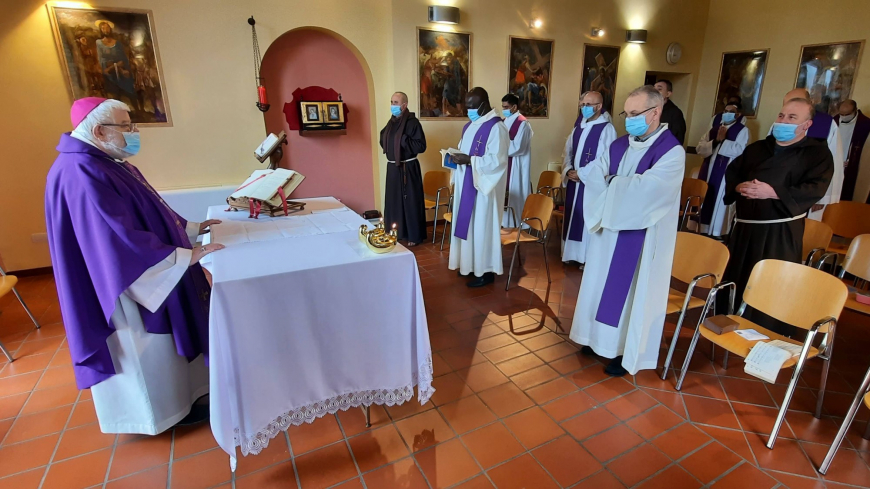 The fraternity of the General Curia made their annual retreat during the week of March 8-13, 2021. It was given by our brother, Giovanni Roncari, Bishop of Pitigliano-Sovana-Orbetello.

The reflections centered on the Spiritual Works of Mercy and were introduced by a key passage of the Poverello's spiritual journey as described in The Legend of the Three Companions: “From that hour he stopped worshiping himself.” Drawing from his vast experience of fraternal life and pastoral service, Bishop Giovanni highlighted for each "work of mercy" the need to cease gazing at oneself as if in front of a mirror, and to allow oneself to be reached by the grace of God and let it bear fruit in one's life for the benefit of many.

The Liturgy of the Hours and the celebration of Eucharist remained central to a daily rhythm that included personal meditation and a constant atmosphere of silence. Also, time spent in the Lord’s presence through adoration was an essential treasure sought out by the friars.

Our friary at Frascati with its verdant surroundings was a favorable setting for the retreat; there were buds on the tree branches signaling the start of spring, along with the first beautiful flowers of the season that were symbolic of a collective want among the retreatants for a renewed flowering of action by the Spirit. The week was capped off with a Renewal of Vows in the presence of the General Minister.

Particular attention was given generously toward compliance with health regulations.

Upon coming down from the "mountain" of Frascati, we can clearly say that there's no escaping the need to take action; indeed, to practice these works of mercy: counseling the doubtful, instructing the ignorant, admonishing the sinner, comforting the sorrowful, forgiving injuries, bearing wrongs patiently, praying for the living and the dead.

Photos from the Archives

More in this category: « Franciscan Institute of Spirituality Meditations for Lent 2021 »