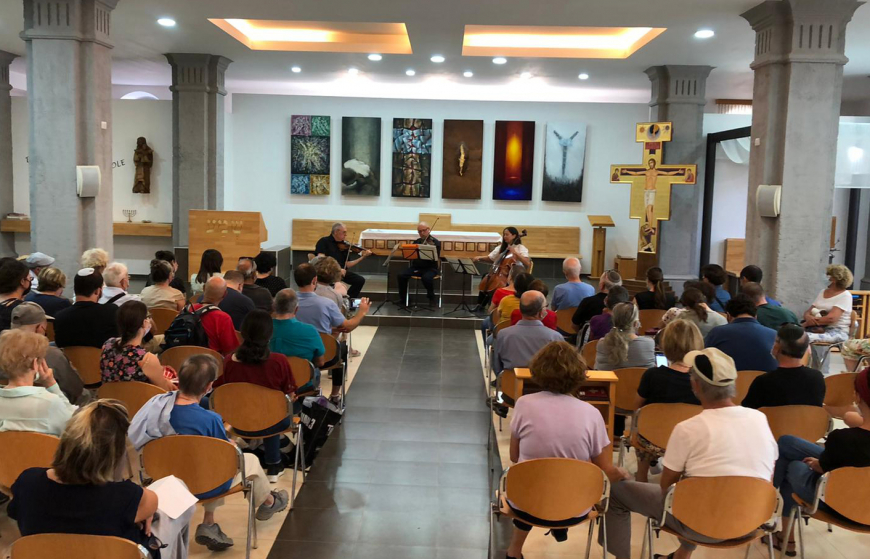 Jerusalem. On October 4-15, the Festival of the Talbiyeh Neighborhood took place in Jerusalem, the neighborhood where our Capuchin friars live. On the last day of the feast, the community of friars welcomed about a hundred neighbors who came to learn about the Capuchins and religious life in general. The whole fraternity took part in tending to the guests, who arrived in two groups and at different times, the first at 10:00 and the second at 11:45, interspersed with a concert of traditional songs.

After a brief preliminary reception in the friary garden near the entrance to the church, the story of the Capuchins and their presence in Jerusalem was presented to the first group, with its various stages: the initial endeavors of the friars from Lebanon; the transformation of the friary into a prison under English mandate and then into a psychiatric hospital starting with the proclamation of the State of Israel; and finally the recovery of the property and its original purpose in the late 1990s. The many questions asked by the visitors showed their great curiosity and their keen interest.

Upon visiting the church, the friars discussed their prayer life and the various academic and pastoral activities they carry out in Israel. This led to an introduction to the work of Br. Pierre Marie-Benoit, who - with the help of friends and with his closest Jewish collaborators - saved more than 4,000 people during the Holocaust. Br. Pierre was highly regarded for his courage as a "righteous among the nations", and a tree was dedicated to him in the famous museum of the Holocaust, the Yad Vashem. The friars also announced their intentions to hold a day of study on Br. Pierre as a religious and on the activities he and his Jewish friends carried out during that difficult period in history.

The second group was also received in a similar way. An elderly woman, filled with excitement, approached one of the friars saying: "I am moved to see with what respect and dignity you have preserved the synagogue of the old psychiatric hospital."

It was a beautiful occasion for celebration and sharing.

In Jerusalem, there is an international community of Capuchin Friars Minor dependent on the Minister General, where the brothers welcome Capuchin friars who come to the Holy Land for formation courses or for spiritual retreats.

More in this category: « The Commission of Economic Solidarity Br. Ermanno Ponzalli OFMCap »