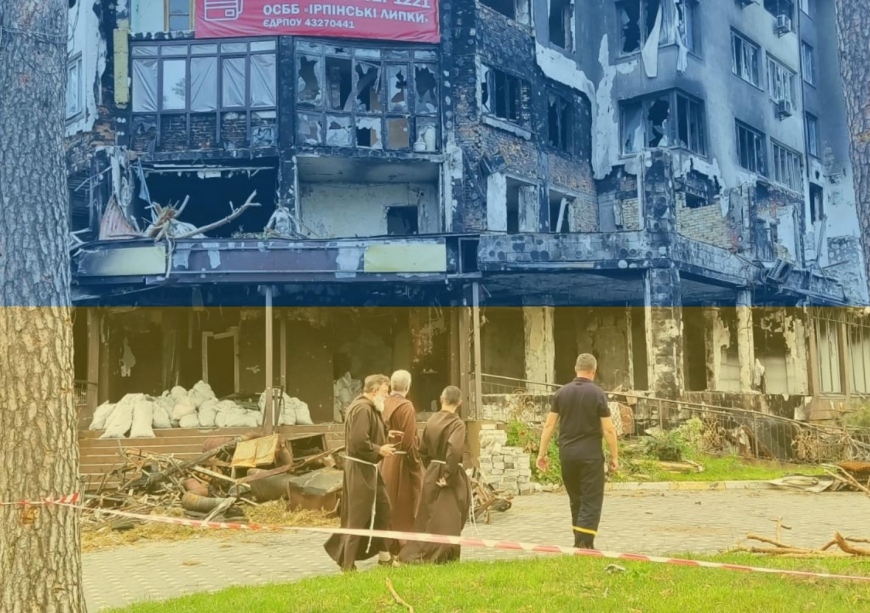 To All the Friars of the Order

Standing Beside Our Brothers in Ukraine

“You weren’t here on February 24th! And now you won’t let us take a tour with a European delegation to show them the places and the events that occurred!” This is how I translate a quote that came from a lively discussion that took place between our guide and a very young Ukrainian army guard who wouldn’t allow us to pass through and see some places near a barracks.

You were not here that day: this expression eloquently indicates what significant and violent moods the local people must have had when, at the beginning of the invasion, they found themselves facing the advance of the Russian army without being able to count on the immediate support of their army.

The past few days we were in Bucha and Irpin, north of Kiev in Ukraine, places renowned in a sad way for what happened during the first month of the war. Accompanying us was a person in charge of the reserve army, a kind of militia in the territory trained for initial intervention in case of attack. It was in Bucha and Irpin that Russian columns intending to advance toward Kiev were stopped – they were already some twenty kilometers away at that point.  You can only imagine all the rest: the destruction, the ransacked homes, the dead, the mass graves, the need to rescue people and those wounded, the concern for one’s own friends and family… and then, as the Russian army retreated, having to face these disasters and try to remedy them with as much mercy as possible, and with alacrity.

The guide led us for about three hours, eager to show us everything and make us understand what had happened; he was intense and justifiably proud of how bravely and selflessly they had withstood an unexpected tragedy, and how they had dared to stand up successfully against the invader. But he was human: upon greeting us, he could not hold back a moment of emotion… A woman known by the friars accompanied us up to Bucha, and then stayed with us the whole time. She works closely with the government and takes special interest in serving the wounded. Her husband and children are at the frontline, one of her daughters-in-law had just come back from there to give birth in Kiev (if I am not mistaken, just the day before our arrival she managed to give birth to a son!). This lady's energy described in a flash just how the Ukrainian people are reacting to so many months of war; they are getting completely involved, with a sense of active solidarity, aware of the dangers and the price to be paid, but unwilling to give up the defense of their freedom and their 'home'!

It was our duty to visit our friars in Ukraine. We went there together – the provincial minister of Krakow, the General Councilor Br. Piotr and me – to bring solidarity from all the friars of the Order and to make our closeness felt. We were able to meet almost all of them and to appreciate, with admiration and satisfaction, the way the friars are continually working in all places to help the needs of the refugees. Many generous volunteers help them, they are organized in different ways according to the place and need, and are constantly serving the people in as many ways as possible. To all of them I say: bravo! Continue with all the attention and energy you have, and with the help that comes from above; the Lord knows well how to support you and how to give you recompense! The friars of Ukraine, and I with them, are thankful for the attention of the brothers throughout the Order and for the help that’s being provided to them. To my request, our circumscriptions have responded in a truly generous way. The latest updates I received from the bursars indicate that the equivalent of about four hundred thousand euros was deposited in the account of the General Curia, while the equivalent of around five hundred thousand euros was deposited in the account of Krakow. Not everything comes from our circumscriptions: it is amazing to see how many people, unknown to us, wanted to contribute in any way they could, some with a thousand, some with a hundred, some with fifty and even some with only ten euros! Thus, altogether, we reached a substantial figure that will continue to allow us to respond attentively and for an extended period to significant needs. To date, of the money collected, about one hundred and fifty thousand euros has been spent. In addition to the money, there are countless friaries throughout Europe that have taken in or helped refugees, and those who have made efforts, via the Krakow friars, Caritas and other relevant organizations, to send goods addressing every need (in this regard, for example, the coordinated effort of several friars in Germany – who managed to organize and send dozens of trucks of aid to Ukraine – is significant!).

I wanted to give you this report to update you on the situation of our brothers, of the people, and of the financial aid we have received. It turns out that what we’ve accrued will be sufficient for quite some time as we continue with the much-needed material support. However, I ask everyone to continue with your unceasing prayers for the brothers who are ‘on the frontlines’ (I was also in contact via video with one who is actually on the war line, an army chaplain with clerical duties who had a compassion that was perfectly sensitive and Christ-like); also, pray for the people who are suffering and call upon the Lord for peace.

May the Lord hear us and grant each of us to become more and more, in every fraternity and in every situation, an agent of peace.

More in this category: Translation of the mortal remains of the Servant of God Br. Daniel Natale »