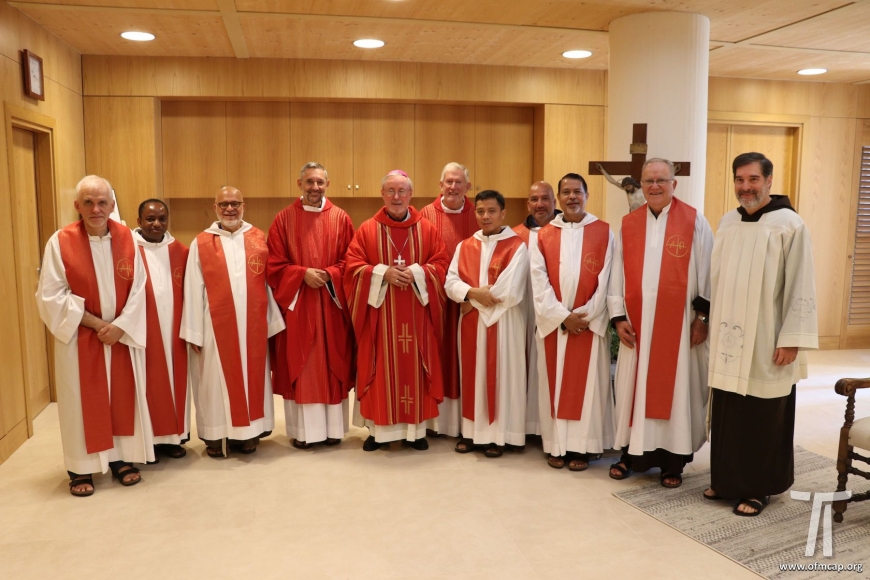 Rome (International College ‘San Lorenzo da Brindisi’), August 27, 2018. The days of the General Chapter have finally come! The 188 capitulars, representing all the circumscriptions of the Order, and the 48 other friars working at the Chapter have all arrived. Today, Monday, July 27, at 9 a.m., they filled the ample and beautiful space of the Collegio chapel for the celebration of the Eucharist. Most Rev. Andrés Stanovnik, OFM Cap., Archbishop of Corrientes, Argentina, presided.

In his homily the Archbishop recalled to the capitulars “the central axis around which the heart of a friar should revolve,” namely, as St. Francis writes in the Earlier Rule, “to treat of those things that regard God” and inspire the brothers to “live the gospel life in the world in truth, simplicity, and joy.” (Const. 147, 2) Explaining his point further, Br. Andrés quoted St. Bonaventure in the Itinerarium: “We must abandon every speculation of the intellectual order and concentrate all our aspirations in God. This is something mysterious and secret, and only the one who receives it can know it, and he will not receive it unless he desires it, and he will not desire it unless he is on fire inside with the fire of the Holy Spirit which Christ has sent upon the earth. This is why the Apostle says that this mysterious wisdom is revealed by the Holy Spirit.” Therefore, we are all called to adoration, contemplation, and prayer. Br. Andrés concluded by recalling that the key to renewal for our form of life in the Church and in the world today is mercy: “That mercy that we experienced when the Lord gave us, as he did to St. Francis of Assisi in his time, to begin a life of penance and then be led among the lepers, to practice mercy among them, not as a duty, but as a debt that we can never pay, for the infinite mercy of the Father has come also to us.”

At the end of his homily Br. Andrés recommended to all the capitulars to entrust themselves to the Virgin Mary, our Mother and Advocate, that she might obtain for the Order the grace of a good Minister who might guide the brothers with mercy and wisdom.

More in this category: « To the Capuchin General Chapter The Chapter Invokes the Holy Spirit on its Work »