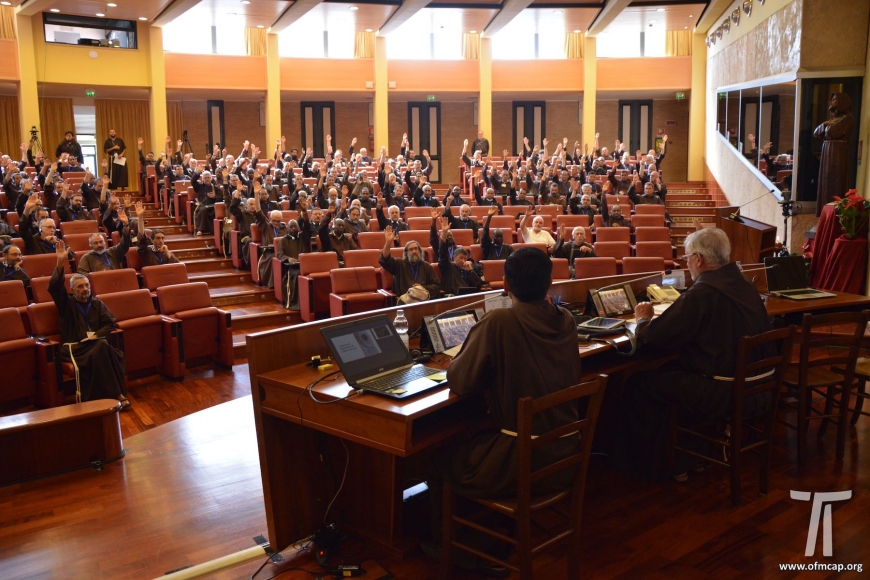 Rome. The first important moment of the General Chapter’s first day was the celebration of the Eucharist at which our brother Archbishop, Andrés Stanovnik, presided.

After Mass the capitulars gathered again in chapel to begin their work. They invoked the Holy Spirit with the Veni Creator Spiritus, intoned by the General Minister Br. Mauro Jöhri. Immediately following, while singing the litany of the saints, the friars processed from the chapel to the auditorium, where the Minister enthroned the Book of the Gospels and pronounced the formula of the rite: “Brothers, I declare the 85th General Chapter of the Friars Minor Capuchin officially open.”

At this point there were various technical announcements for the use of the Chapter equipment: headphones for simultaneous translation, the use of the tablets, logistical instructions, etc. Then each capitular was called by name and announced his presence. The Minister then pointed out certain variations to the Chapter procedures deriving from the renewed Constitutions, and proposed these for approval by the capitulars. Voting was by a show of hands, the variations were approved unanimously.

Given the many languages and the diversity of the participants, it is necessary to work in geographic or language groups. The compositions of the groups is based on the Conferences, but also by language or other factors. Thus, leaving the auditorium around midday, the capitulars them met in different rooms. There they got to know each other and were able to form their own coetus. They were to elect a president, a secretary, and nominate a candidate for the Council of the Presidency.

When the capitulars returned to the auditorium in the afternoon, the composition of the various coetus having been completed and made known to the full assembly, there began the formation of the other Chapter structures, such as the Council of the Presidency, moderators, secretariat, scrutineers, etc.

More in this category: « The 85th General Chapter has Begun General Minister’s Report »