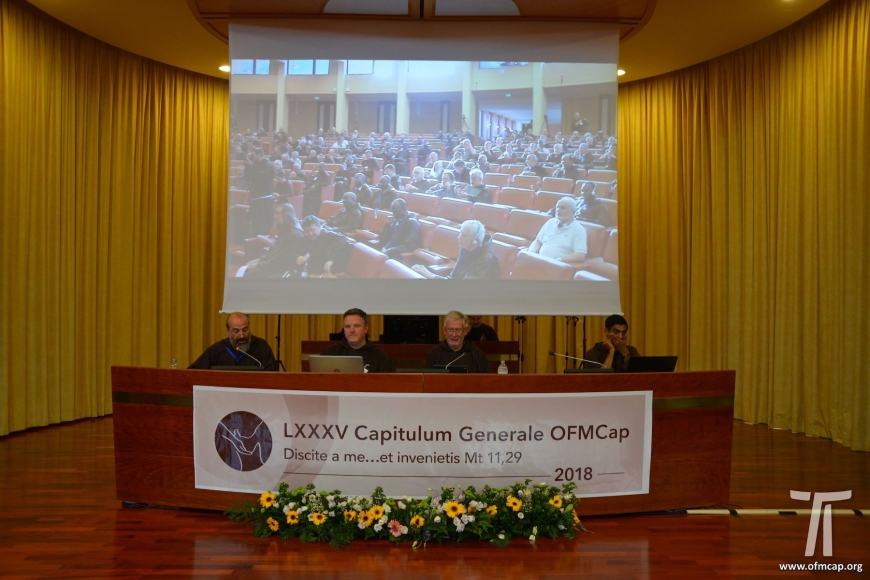 Rome, August 28. Today was the day for the General Minister’s report, which aims to outline for the brother capitulars the current state of the Order. Br. Mauro presented his report with mostly spontaneous remarks and with help of PowerPoint images.

The text of the report is divided into twelve sections plus a conclusion. Given the limited space for this news item, we will mention only the principal points. The third section sketched a big picture of the Order with reference to PCO VIII, held in 2015, on ‘The Grace of Working.’ Here the General Minister observed that “the search for union with God is the first work of the friars.” He therefore invited them to search their souls on “the primacy of the life of prayer in the life of the friars.” Continuing on the same theme of the PCO, Br. Mauro recalled that the brothers must work together in a spirit of minority and in the service of all.

The General Minister also gave some time to speaking on changes and developments in the Order in recent years, using statistical data to which he also gave his interpretation. At the end of 2017 there were 10,127 friars, 237 fewer than six years ago. The decrease in the number of friars has various causes – death, leaving the Order, transfer to the secular clergy, dismissals, etc. On the other hand, the number of friars in formation has increased, above all in Asia (+381) and in Africa (+138), where the Order is betting on its future. The situation in Eastern Europe is stable (+32), but in Western Europe and the Americas there is a decrease. The Italian Capuchins remain the largest single group with 1,855 all together, followed by the Indian Capuchins with 1,792.

The Order also has many bishops. Fifteen of them, from all over the world, have been appointed during this last sexennium. Seventeen retired during the sexennium and twelve died.

The General Minister’s report also touched on many other points, such as the administration and animation of the Order, the General Curia, the institutions of cultural heritage, the houses dependent on the General Minister, and finally the journey of the Franciscan Family.

More in this category: « The Chapter Invokes the Holy Spirit on its Work An Inseparable Triptych »