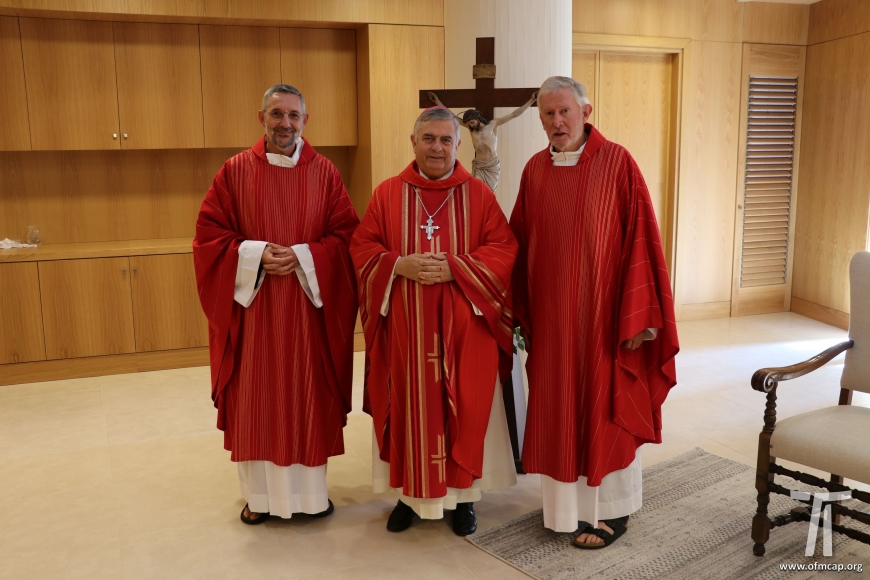 Rome, August 29. On the schedule for the third day of the General Chapter was the Economic Report and the Eucharist with Most Rev. José Rodriguez Carballo, Secretary of the Congregation for Institutes of Consecrated Life and Societies of Apostolic Life.

The first part of the morning was given to hearing the Economic Report presented by the General Bursar of the Order, Br. Alejandro José Nuñes Ennabe. Br. Alejandro emphasized how economic realities in the Order must be marked by the transparency that should also characterize our personal and fraternal lives, and by the co-responsibility of all the friars in the management of the goods of the Order.

The text of the report was divided into three parts. The first part dealt with the organization of the Office of the General Bursar, its various entities, houses and institutions, accounts, and office management. The second part treated the economic figures and administrative acts of the sexennium. The third part offered some recommendations for the future. Br. Alejandro presented with clarity and competence, making use also of figures and graphs projected with PowerPoint. The warm applause at the end of the presentation showed the approval of the capitulars for the precision of the report and the work it represented.

Later in the morning, after the Economic Report, was the time for the Eucharist with Most Rev. José Rodriguez Carballo, Secretary of the Congregation for Institutes of Consecrated Life and Societies of Apostolic Life and General Minister of the OFM (2003-2013) before his current appointment. The liturgy today recalls the martyrdom and beheading of St. John the Baptist. The readings, perhaps out of respect for the presider, were proclaimed in Spanish. The homily, however, was given in Italian, with simultaneous translation into English. Taking inspiration from the two readings, the homily can be summed up in the triptych: truth, prophecy, and hope. Truth, as John always announced in his preaching, courageously and without regard for human respect, and which led him to martyrdom by Herod. Prophecy, to which the Forerunner witnessed with his life and not with the chatter of ideology. Hope, which must always accompany the announcement of the Gospel of Jesus, which is a Gospel of joy, never allowing itself to be overcome by pessimism or fatalism. May truth, prophecy, and hope be with our capitulars as they work, that they may be guided by the Spirit.

More in this category: « General Minister’s Report A world of initials »