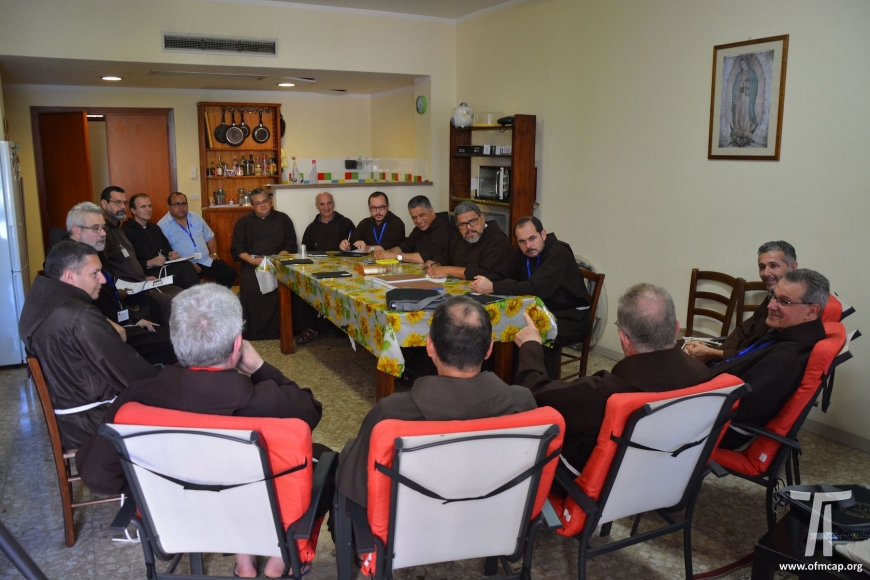 Rome, August 30. The Capuchin General Chapter, having reached its fourth day, began today to discuss the report of the outgoing General Minister, Br. Mauro Jöhri, as well as the economic report given by the General Bursar, Br. Alejandro Nuñes Ennabe. Interventions could be given by individuals or by a coetus.

What are the coetus? (from co- “together” +‎ itus “going”, from eō “I go”). These are the smaller groups that form at the Chapter according to language, conference of major superiors, or geographical area. These coetus are usually indicated by their initials: ASMEN, CCA, CCB, CCMSI, CECOC, CENOC, CIC, CIMPCap, CONCAM, CONCAO, EACC, NAPCC and PACC. The groups reflect on their own and then each group secretary prepares a synthesis to present in the plenary session of the Chapter. Following the interventions from the various coetus there can be time for personal interventions; that is to say that each capitular can express himself on the matter at hand.

The interventions today were broadly positive: the texts of the reports seemed balanced and clear, rich with reflection and open to the future. Discussion was more animated on the topics of the institutions of cultural heritage (the International College ‘San Lorenzo da Brindisi’, the Historical Institute, the Franciscan Institute of Spirituality at the Pontifical University ‘Antonianum’, the Capuchin Central Library, and the inauguration of the united Franciscan University in Rome), the many houses directly dependent on the General Minister, and the current expansion of the Order in certain parts of the world and its downsizing in others.

The interventions of the friars illustrated the shades of meaning and different accents deriving from our diversity of perspectives and location. Nevertheless, the discussion was always serene and constructive, peaceful and open to listening.

More in this category: « An Inseparable Triptych The Greatest Love »