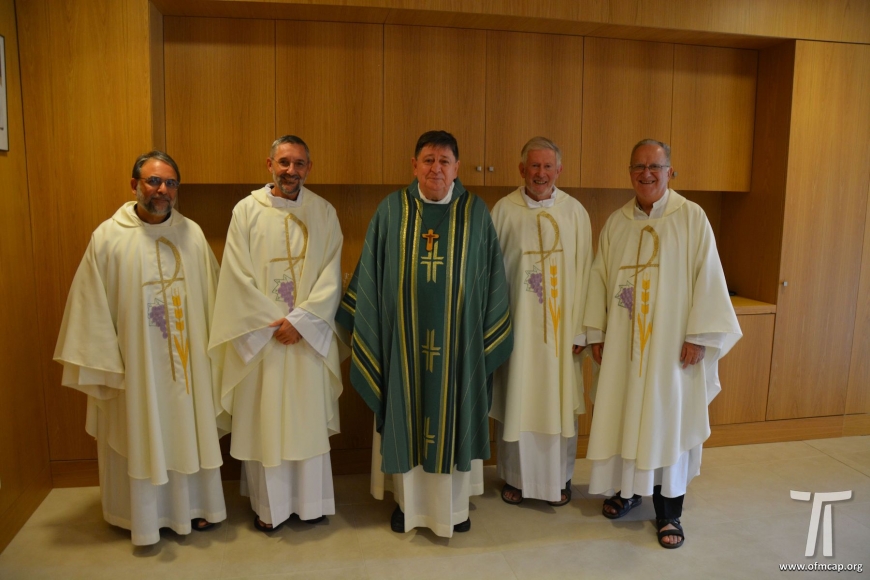 Rome, August 31. General Chapter is already in its fifth day, having started this past Monday. Today’s agenda was to continue discussion on the Economic Report presented by the General Bursar, Br. Alejandro Núñez Ennabe, followed by midday Mass with Cardinal João Braz de Aviz, Prefect of the Congregation for the Institutes of Consecrated Life and Societies of Apostolic Life.

Discussion on the Economic Report showed that it was generally appreciated both by the coetus and by individuals, especially in the clarity of the text and the transparency of the figures. Questions brought up in discussion received immediate responses that were balanced and calm. At the end of the discussion the Economic Commission was established to further study Br. Alejandro’s report.

The celebration of the Eucharist began at noon. The Cardinal, flanked by the General Minister, his Vicar, and some members of the General Council, began the solemn event. In respect for the presider, the readings were proclaimed in Portuguese. Right from the beginning everyone was pleasantly surprised by the Cardinal’s amiability and simplicity. At the time for the homily he put aside any prepared text and spoke spontaneously in Italian, which Br. Charles Serignat masterfully translated into English.

“Consecrated life in the Church,” the Cardinal exhorted, “has a very important place. God has arranged for the Spirit to speak to the Church through the multiplicity of charisms. And this journey in the life of the Church will never end. The charism does not come from human beings, but from God. God knows how long it will remain in the Church. The Franciscan charism, instead of declining, grows and multiplies into other charisms. This is a great gift for the Church. This Chapter of yours is perhaps the largest among those I have been able to visit during my seven years in Rome.”

The Cardinal then cited the prologue of St. Bonaventure’s Itinerarium: “No one enters into God except through the Crucified. Paul reminds us that he doesn’t preach worldly wisdom but the foolishness of the Cross. Why does one enter into God only through the Cross? Not because God needs victims; God doesn’t even need worship. He is perfect in himself. He acts among us through the Cross because it is the greatest sign of love. Where reason fails because it is not able to give any further answer, love remains. No one has greater love than the one capable of giving his life for his brothers. This is a very important teaching for us …”

After Mass, the Cardinal stayed for lunch with the capitulars.

More in this category: « A world of initials End of the First Week of General Chapter »