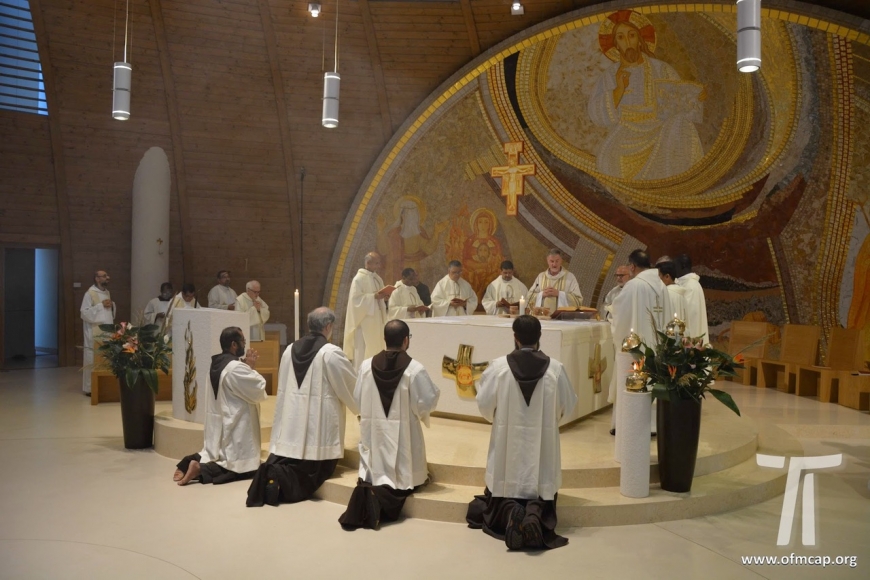 The Capuchins have chosen their New Administration

Rome.  The Capuchin Friars Minor now have a new central administration, which will remain in office for six years. The elections were during the 85th General Chapter, which was held in Rome, at the International College ‘San Lorenzo da Brindisi’, from August 27 to September 15 of this year.

Br. Roberto Genuin was elected General Minister. He is from the region of Venice, is 57 years old, a ‘doctor utriusque juris’, and has served multiple terms as provincial minister. He is the 73rd General Minister of the Capuchin Order, and the third of this millennium – after John Corriveau and Mauro Jöhri – and is from Venice as was Br. Flavio Roberto Carraro, who was General Minister from 1982 to 1994. Br. Roberto will be assisted in his service by the General Council, made up of ten friars representing the whole Order according to different geographical areas: Br. José Angel Torres Rivera of the Custody of Puerto Rico, one of the ten councilors, was elected General Vicar. The others are Carlos Silva (Brazil), Celestino Arias (USA), Francesco Neri (Italy), John Baptist Palliparambil (India), Kilian Ngitir (Cameroon), Norbert Auberlin Solondrazana (Madagascar), Pio Murat (France), Piotr Stasinski (Poland) and Victorius Dwiardy (Indonesia).

188 friars from 106 countries of the world participated in the General Chapter, in addition to about fifty more friars who assisted as officials and in other services. More specifically, the capitulars were from Europe (69), Asia (43), Africa (27), South America (33), North America (13), and Oceania (3). Thirteen of the capitulars were delegates of the Conferences of Major Superiors. Eighteen friars served as interpreters and translators; the seven languages used at the Chapter were Italian, English, Spanish, French, Portuguese, Polish, and Indonesian. Three friars made up the Chapter Secretariat, three served as recording secretaries, four were in charge of liturgy, three in Communications, and others in IT.

The work of the Chapter began on August 27 with the celebration of the Eucharist in the ample and beautiful chapel of the College. Br. Andrés Stanovnik, Capuchin archbishop of Corrientes, Argentina, presided. In his homily, he recalled to the capitulars that, “the central axis around which the heart of the friars should revolve” is – as St. Francis writes in the Earlier Rule, to “be about what regards God.” This is to say what inspires the brothers to “live the gospel life in the world in truth, simplicity, and joy.” (Const. 147, 2) Br. Andrés concluded his homily by recalling that the key to renewal in our form of life today, in the Church and in the world, is mercy: “That mercy that we experienced when the Lord gave us, as he did to St. Francis of Assisi in his time, to begin a life of penance and then be led among the lepers, to practice mercy among them, not as a duty, but as a debt that we can never pay, for the infinite mercy of the Father has come also to us.”

The first and most important event of any Chapter is the report of the outgoing General Minister, who presents the state and activity of the Order in the past sexennium. Br. Mauro Jöhri, the outgoing General Minister at this Chapter, arranged his report in twelve points that came together to present a picture of the Order. Taking up the topic of PCO VIII, held in 2015, he observed that “the seeking of union with God is the first work of the friars” and thus invited them to examine themselves on “the primacy of the life of prayer.”

The General Minister also gave some time to speaking on changes and developments in the Order in recent years, using statistical data to which he also gave his interpretation. At the end of 2017 there were 10,127 friars, 237 fewer than six years ago. The decrease in the number of friars has various causes – death, leaving the Order, transfer to the secular clergy, dismissals, etc. On the other hand, the number of friars in formation has increased, above all in Asia (+381) and in Africa (+138), where the Order is betting on its future. The situation in Eastern Europe is stable (+32), but in Western Europe and the Americas there is a decrease. The Italian Capuchins remain the largest single group with 1,855 all together, followed by the Indian Capuchins with 1,792.

The Order also has many bishops. Fifteen of them, from all over the world, have been appointed during this last sexennium. Seventeen retired during the sexennium and twelve died.

The General Minister’s report also touched on many other points, such as the administration and animation of the Order, the General Curia, the institutions of cultural heritage, the houses dependent on the General Minister, and finally the journey of the Franciscan Family.

The third day of the General Chapter was given to hearing the Economic Report presented by the General Bursar of the Order, Br. Alejandro José Nuñes Ennabe. Br. Alejandro emphasized how economic realities in the Order must be marked by the transparency that should also characterize our personal and fraternal lives, and by the co-responsibility of all the friars in the management of the goods of the Order. Br. Alejandro presented with clarity and competence, making use also of figures and graphs. The warm applause at the end of the presentation showed the approval of the capitulars for the precision of the report and the work it represented.

Later that same morning, after the Economic Report, was the time for the Eucharist with Most Rev. José Rodriguez Carballo, Secretary of the Congregation for Institutes of Consecrated Life and Societies of Apostolic Life and General Minister of the OFM (2003-2009) before his current appointment. The liturgy of the day recalls the martyrdom and beheading of St. John the Baptist. Taking inspiration from the two readings, the homily can be summed up in the triptych: truth, prophecy, and hope. Truth, as John always announced in his preaching, courageously and without regard for human respect, and which led him to martyrdom by Herod. Prophecy, to which the Forerunner witnessed with his life and not with the chatter of ideology. Hope, which must always accompany the announcement of the Gospel of Jesus, which is a Gospel of joy, never allowing itself to be overcome by pessimism or fatalism. May truth, prophecy, and hope be with our capitulars as they work, that they may be guided by the Spirit.

Two days later the Chapter celebrated Mass with Cardinal João Braz de Aviz, Prefect of the Congregation for the Institutes of Consecrated Life and Societies of Apostolic Life. “Consecrated life in the Church,” the Cardinal exhorted, “has a very important place. God has arranged for the Spirit to speak to the Church through the multiplicity of charisms. And this journey in the life of the Church will never end. The charism does not come from human beings, but from God. God knows how long it will remain in the Church. The Franciscan charism, instead of declining, grows and multiplies into other charisms. This is a great gift for the Church.”

After the election of the new General Minister on September 3 and his Council on the 6, the General Chapter made the traditional pilgrimage to Assisi where, before tomb of the Seraphic Father, the capitulars prayed that his light might continue to illuminate and guide the Order.

On September 14 the capitulars had an audience with Pope Francis. The outgoing General Minister, Br. Mauro Jöhri, presented his successor, Br. Roberto Genuin. Br. Roberto gave the Holy Father a brief and precise greeting, to which the Pope replied with his own unscripted remarks. He recalled that the Capuchin friars are always friars of the people, close to them even in the difficulties of daily life, always approaching others with simplicity. The friars must always be close to the poor and the suffering like Father Cristoforo in the novel The Betrothed, and like the Capuchins the Pope met recently in Dublin, Ireland. They must be apostles of the confessional, of reconciliation. They must be men of prayer, of a prayer that is simple and joyous, as well as being peacemakers in the midst of the people. Pope Francis then gave his apostolic blessing and greeted the friars one by one.

The work of the Chapter concluded during the evening on September 15, the day dedicated to Our Lady of Sorrows. This was ahead of schedule – the Chapter was to conclude on September 16 – thanks to the quickness with which this Chapter has worked, and thanks above all to the use of the tablets for voting in the plenary assembly.

The morning of this final day was given to voting on texts prepared by the commissions. After remarks from the secretaries of the coetus, who synthesized what had been said in these groups, texts were presented and motions were put to a vote. The motions were on modifications to the Statutes of the General Curia, on fraternal collaboration, and on solidarity among the circumscriptions. All of the motions were approved by a broad majority.

The final act of the Chapter was an evening Eucharist at which the General Minister, Br. Roberto Genuin, presided, flanked by all the members of the General Council. The liturgy was enriched by song in various languages: Portuguese, Swahili, Indonesian, Spanish, etc. In his homily the General Minister reflected on the title of an important letter of his predecessor, Let us Fan the Flame of our Charism, and invoked the intercession of the Blessed Virgin Mary on the whole Order. After the homily the brother capitulars were invited to renew their religious profession, each in his own language, and their commitment to the vows of obedience, poverty, and chastity. At the end of the celebration, the Te Deum was sung to thank the Lord for the support of his grace during all the work of the Chapter. Ad maiorem Dei gloriam!

More in this category: « Audience of Pope Francis with the Chapter Participants New videos from General Chapter »