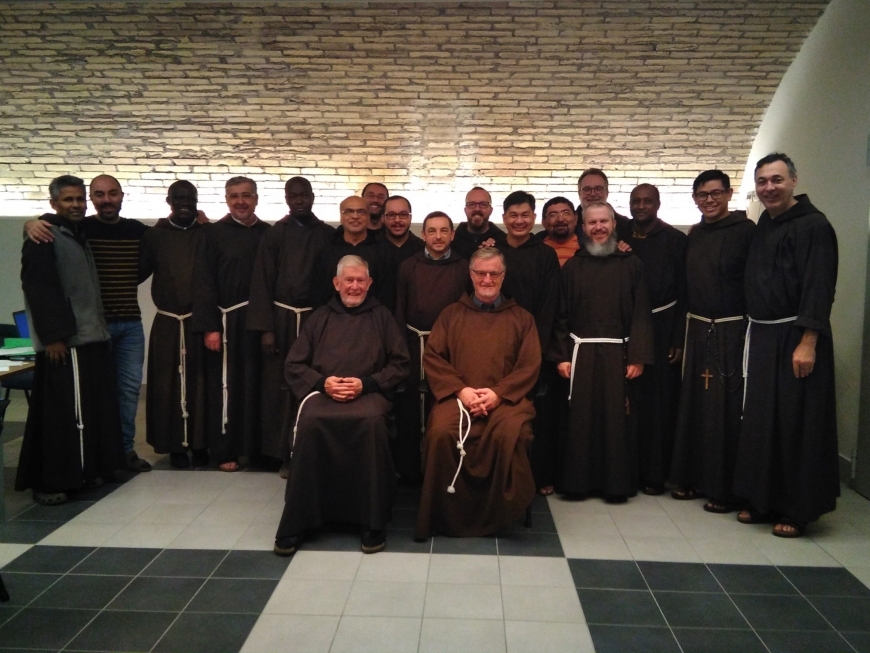 Rome. The members of the International Formation Council (CIF) met at the General Curia on November 19-24. The General Minister, following the initial letter he sent out to the whole Order at the beginning of his term, inquired of the council as to what friars might expect over the coming years. In the meantime, he offered three considerations:

The first: we must thank the Lord for our Order and we must be joyful, because we have met the One who with one glance can penetrate through all that is good in our life, which is his gift.

The second concerned fraternity: we, the Minister said, are part of a very wide, diverse fraternity but still a single fraternity, and it is here that God grants us growth in our vocation. Accordingly, he urged members of the Council to act on the Ratio, by transforming its words into deeds.

The third: Br. Roberto recalled how during the General Chapter, the capitulars, when mentioning the Ratio, clearly recognized our identity as “lesser brothers”, by which the Order identifies itself with the values it professes. He admitted, in any case, that now one of the biggest concerns will be its implementation around the world, which will require a great effort by way of translation.

The Minister then pointed out the very drastic drop of vocations in the Order, especially in Europe, inviting all nonetheless to live our common life effectively, even if the friars are few. He also touched on the theme of collaboration, which is becoming increasingly necessary despite the reduction of vocations, but is proving at the same time to be a value which enriches us. He was candid about the strong resistance met in this, but has restated clearly that our priority does not lie in maintaining our structures, but in living our charism well. This resonates with the missionary dimension of our life, which still must be nurtured in some areas of the Order.

Finally, Br. Roberto quoted Pope Francis’s address to the General Chapter last year, when he indicated three aspects that define the Capuchins, and then asked that they be realized. They were: to be close to the people, especially the poor; to be builders of communion and ministers of mercy; to be men of simple prayer.

The meeting was also attended by Br. Mauro Jöhri, the former General Minister, who in the past had expressed in various ways, especially in his writings on our identity, the reasons for carrying forward the work of the Ratio.

Brother Kilian, General Councilor who oversees the CIF, stressed the importance of collaborating and above all understanding the text of the Ratio, so that the CIF council members can help the friars of the respective conferences prepare the ratio localis.

Br. Charles Alphonse said that the Ratio will help friars get a clear idea about the teachings of St. Francis and St. Clare. He said that it will be like giving them specific guidelines that focus on what is important to know about our lives as Christians, religious, Franciscans and Capuchins. Br. Jaime Rey, for his part, presented the history, objectives and contents of the entire text of the Ratio to the friars. He also pointed out how in the past six years there have been many friars directly involved in the preparation of the text and that between the former Minister Br. Mauro and now Br. Roberto, there is a continuity of thought that fraternity is the most important setting for formation. The ratio emphasizes that a formation team, and not just a single formator, must be provided to accompany the friars in formation. He said that the General Secretariat for Formation (with the help of Beppe Roggia) after hosting four continental meetings as well as having discussions with several experts, worked out the contents of the ratio with the help of the CIF. This text has subsequently been modified by an appointed commission under Br. Roberto and the General Council, and was finally reviewed and approved by them with some modifications.

More in this category: « Visita Pastoral Visit to the Presedential Council of the OSF Publication of the Ratio »