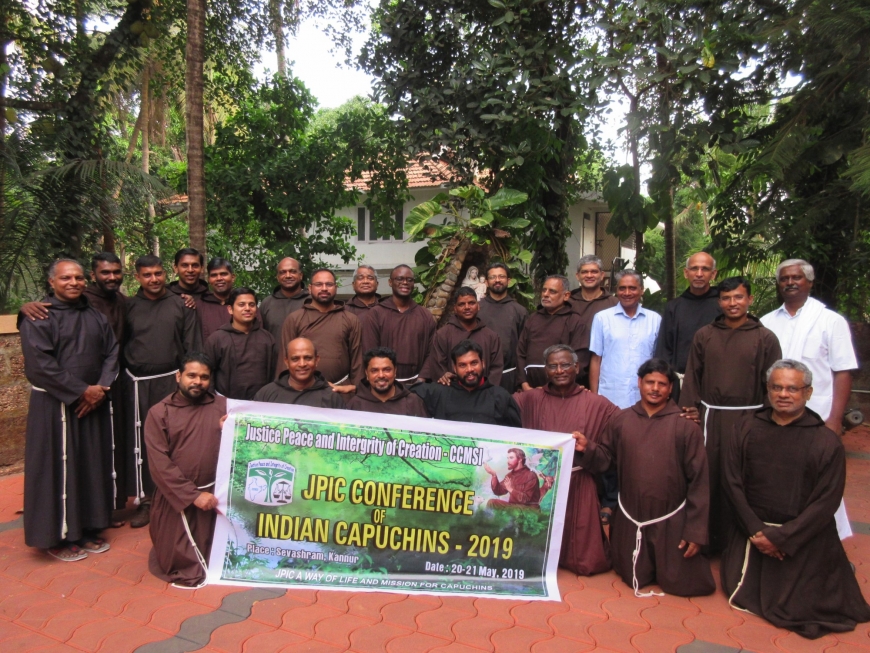 JPIC Conference the Capuchins in India

Peaceful Co-existence in a Multicultural and Religiously Diverse Society

Kannur, Kerala, India: The world today is sadly divided by ideo­logical conflicts, over-enthusiastic nationalism, racial discord, ethnic and tribal conflicts,  and religious and intercul­tural tensions. It is becoming a real impossi­bility for people of different religions and cultures to live side by side with respect and justice.

St. Francis of Assisi had an intuitive, fundamental openness that today urges us forward to risk bold initiatives, cooperating with other people of good will. His approach to peacemaking was of openness to learning from the virtues and practices of other religious traditions while remaining firmly rooted in one's own.  His dialogue with the Sultan in Damietta 800 years ago fits the model of ‘interreligious relations’ since he came openly as a person of faith and left behind the world of politics, crusade, and religious hatred. Such a multiculturalism and interreligious dialogue offers an ideal platform to reach out to various cultures, religions, languages, peoples, and nations in its service of love and human promotion.

These persepctives formed the theme of the second national conference of Justice, Peace and Integrity of Creation (JPIC) for the Capuchin friars in India, “Peaceful co-existence in Multicultural and Religiously Diverse Societies.” Held in the context of this year’s 800th anniversary of the encounter between St. Francis of Assisi and the Sultan  Al-Kamil in Damietta Egypt, the conference brought together thirty participants from eleven Capuchin circumscriptions of the CCMSI conference of India.

Following the first conference held in Kotagiri, Tamil Nadu in 2016, participants made great progress in taking concrete action for social justice. As such, several initiatives had been established in various provinces including  peace clubs in schools, right to food and micro-financing projects for the poor, legal aid, advocacy projects for human rights,  prevention of human trafficking, child protection and support ministry, womens’ empowerment, environmental protection programs, and many others.  Moreover, a lot of awareness of JPIC had been created, and now more friars are involved in JPIC and social projects in their respective provinces in India. This was demonstrated by the increased number of participants in this year’s conference in Kannur.

Br. Stephen Jayaraj, the Provincial Minister of the Pavantma Province welcomed the members and resource persons, while Br. John Baptist, General Councilor, inaugurated the conference and gave the opening speech. He explained our Franciscan Roots of JPIC and compared these to the worship of Earth as Mother in Indian culture. The  input sessions of Mr. Sachidananda Swamy and Mr. Sharafudden were thought-provoking as the two expressed the need for dialogue and the responsibility of Capuchins in promoting peace, environmental concern and above all understanding our own culture of acceptance and tolerance.

Br. Benedict Ayodi, the international secretary for JPIC commission, headed the conference with three input sessions, explaining the relevance of the meeting between the Sultan and St. Francis in our context, the values of JPIC, and the role of a JPIC animator.  He introduced the film The Sultan and the Saint which was later reviewed by the participants. His presence and interventions were motivating and an encouragement to the brothers.

At the conclusion of the Conference, it the participants decided to raise awareness of this 800th anniversary in all our fraternities, institutions, parishes and formation houses.  Friars will strive to create a better rapport with people of other religions and especially with Muslim communities. Several events and programs will be developed by the core committee in order to realize this initiative.

This year is also the 150th anniversary of Mahatma Gandhi and participants made a commitment to promoting the nonviolent approach in solving conflicts. While Gandhi was greatly appreciated across the board, his philosophy of a nonviolent approach to conflicts is ignored.  In response to this, the friars considering starting an international peace center to promote the values of nonviolence, reconciliation,  and interreligious dialogue in India.

Environmental justice was another area that got a lot of attention from the participants. It was noted that climate change and global warming are already affecting many people in India. With extreme weather including constant cyclone, floods, and heat waves, many people, especially the poor, were suffering due to the consequences of climate change. It is therefore urgent to take concrete and bold actions to tackle climate change, given the fact that India's pollution levels are some of the highest in the world.  Several climate action programs had been started including tree planting, recycling, and use of solar energy. More, however, needs to be done. On the occasion of the 4th anniversary of the Pope’s encyclical, Laudato si’, the brothers committed to expanding their initiatives to include lifestyle change,  organic farming, divestment from fossil fuels, and advocacy work at both national and international levels.

The sessions came to an end with the remarks from Br. John Baptist and Br. Ben Ayodi who advised the brothers to be the torch bearers of JPIC in their provinces.

More in this category: « JPIC Workshop in Malawi Embrace the World »