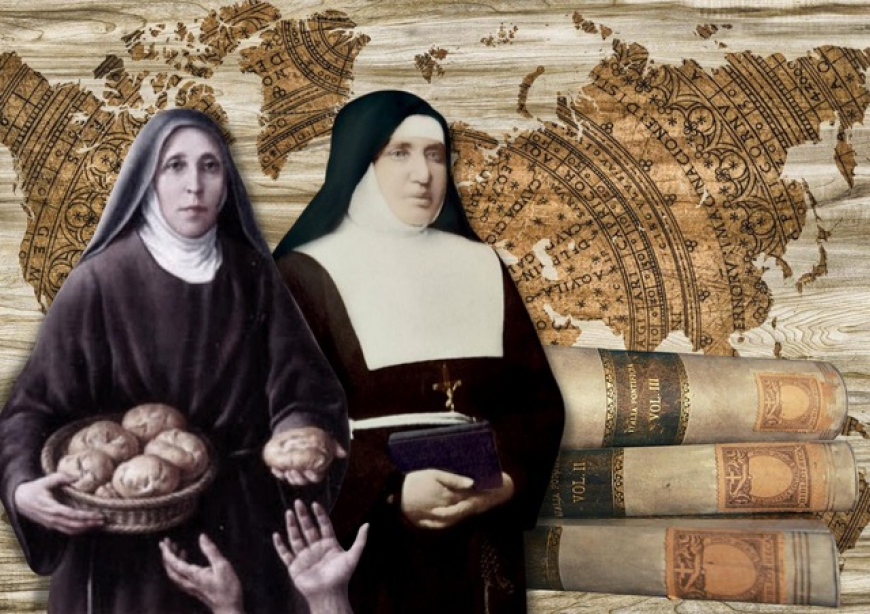 May the Lord give you peace!

1. It is with great joy and gratitude to the Lord that on May 15, 2022, we celebrate the canonization of Maria Francesca di Gesù (given name: Anna Maria Rubatto), foundress of the Capuchin Sisters of Mother Rubatto, and of Maria di Gesù (given name: Carolina Santocanale), foundress of the Capuchin Sisters of the Immaculate Conception of Lourdes; two women who knew well how to respond to the needs of the poor. This event is also a vivid, clear sign of the profound communion between the Order of Capuchin Friars Minor and the greater family that has gradually grown over time, bringing together many institutes of both men and women alike.

2. These two Institutes become part of the extended Capuchin Family with the decree of aggregation under the then Minister General, Br. Pacifico da Seggiano: June 10, 1909 for the Capuchin Sisters of Mother Rubatto and December 8, 1909 for the Capuchins of the Immaculate Conception of Lourdes. Since then, they have shared with us the gift that St. Francis of Assisi received from the Lord: to live together in poverty and in minority.

3. The paths of the two foundresses intersected with the Capuchins at different times and in different ways: with Father Angelo da Sestri Ponente for Mother Rubatto and Father Giovanni Maria Schiavo for Mother Santocanale. This is how living without anything of one's own took wing in their fledgling fraternities, where God was All Good, Supreme Good, Totally Good. As it was for St. Francis – a faithful disciple of Christ – poverty and fraternity became for them a sign of a humble love, which keeps nothing for itself and which finds, in restoring everything to God, authentic peace, perfect joy and happiness and the bond of communion.

4. During the time in which the unification of Italy was taking shape, the two sisters in their own particular way joined forces: Mother Maria Francesca di Gesù (Rubatto) worked in the north, and Mother Maria of Jesus (Santocanale) worked in the south; all the while, they shared a line of continuity with respect to charity and dedication to the poorest of the poor. The poor also meant to Mother Rubatto the many who emigrated from Italy to reach Uruguay, Argentina and Brazil; while the poor meant to Mother Santocanale those who had lost everything in the land of Sicily – among them, those who were alone, orphaned or without any assistance and material support.

From this point forward, through brief glimpses into their lives, we will be able to grasp how fruitful their "yes" had become, and how the abundance of graces that the Lord had given them also flowed back to the Capuchin friars.

5. Maria Francesca di Gesù, known in the world as Anna Maria Rubatto, was born in Carmagnola (Turin) on February 14, 1844. At the age of four she lost her father, and then at nineteen, her mother as well. She then left her birthplace and moved to Turin where she became the lady-in-waiting of a noblewoman named Marianna Scoffone, while also dedicating herself to helping the sick of Cottolengo and teaching catechism.

In the summer of 1883, she went to Loano (Genova). Leaving church one day, she encountered a young unskilled worker who suffered a head injury due to a stone which had fallen from nearby scaffolding. She helped him without hesitation. The building under construction was intended to house a female community for which Capuchin Father Angelico of Sestri Ponente was in search of a leader. He sensed that Anna Maria was the person he was looking for.

At age forty and living a routine life, she was startled by this. After intense prayer and the advice of her spiritual director, and of St. John Bosco as well, she decided to be part of the new religious family. Thus, on January 23, 1885, the Institute of the Capuchin Tertiary Sisters of Loano was born (since 1973, the Capuchin Sisters of Mother Rubatto).

With the new name of Sister Maria Francesca di Gesù, Anna Maria was made the first superior by mandate of the Archbishop of Genoa. After only three years, the Institute was in full expansion. In 1892, she personally opened a house in Montevideo, Uruguay. Then in 1899, she opened the house in Alto Alegre, north of Brazil, in order to help the “St. Joseph of Providence” mission of the Capuchin friars there. On March 13, 1901, only eighteen months after they arrived, all seven nuns were killed, along with the four Capuchin friars, two tertiaries and 240 faithful.

In 1902 Mother Maria Francesca embarked on her last journey, which would last for two years, from Genoa to Montevideo. She died in Montevideo on August 6, 1904. On October 10, 1993, in St. Peter's Basilica, she was beatified by St. John Paul II.

6. Maria di Gesù, known in the world as Carolina Santocanale, was born in Palermo on October 2, 1852. From the time of her childhood, she cultivated a desire to enter the monastery of St. Caterina, meeting opposition from her parents.

In 1880, she moved to Cinisi and lived with her grandmother. After a long illness, she had met Blessed Giacomo Cusumano (who started “Boccone del povero”) and soon afterward embarked on a new initiative based upon the Franciscan Rule with the help of her parish priest. On June 13, 1887, together with other young women, she received the tertiary habit in the church of the Collegio di Maria in Cinisi.

Since the location chosen for them to live their common life was found to be lacking, she obtained permission from her parents to live in her grandparents’ house, into which she and her first companions moved on February 11, 1891. She immediately began her apostolate of visiting and serving the poor and the sick. Later, she also took in a number of orphans.

As the number of sisters increased more and more, she felt the need to adopt a rule, which was granted to her together with the decree of aggregation as an institute to the Order of Capuchin Friars Minor. On June 13, 1910, Carolina, with the new name of Maria di Gesù, was vested with the Capuchin habit.

The dramatic impact of the First World War was also felt by the Institute, but their trials grew even more intense when the Archbishop of Monreale, while praising the work they were doing, called upon her to close their novitiate since they lacked the means for subsistence.

Discouragement and misunderstandings began to take a toll on her health. The "Lady", as she was respectfully called by the devoted people of Cinisi, was forced by her brothers to move to Palermo and look after herself. She regained her strength and returned to the Institute. On January 24, 1923, the archbishop sent her an order to reopen the novitiate and the decree confirming the Institute. She died on January 27, 1923 in Cinisi. On June 13, 2016, she was beatified in the Cathedral of Monreale.

7. The great value of aggregation in the Order, as it is attested to in this double canonization, recalls participation in the precious and unique spiritual wealth of the Franciscan charism to which we all feel strongly rooted and attached. This mutual support will serve as a great benefit as we continue to grow together in adhering to and proclaiming the Gospel.

8. You, dear sisters, reward us anew by showing us that living simple, humble, constant, faithful service, carried out with joy, without searching for recognition, builds up fraternity and invites us to live it in a common way, but above all it recalls our being with the people and providing concrete and living answers to their sufferings. Thank you, dear sisters, because you remind us friars of our duty to remain, according to the well-known expression, "friars of the people".

9. My wish, dear sisters, is that you always manage to keep your way of life intact, not by way of mere repetition of activities or customs, but by reliving the vision and the fundamental inspiration of your founding Mothers: in short, the capacity for loving each and every person and wanting what’s best for them. May your service to the “lepers” of today’s world always have as its foundation the face of Christ crucified and the maternal gaze of Mary, the Immaculate Virgin.

10. My dear brothers and sisters, may these two women whose holiness of life is pointed out to us today by the Church, come to our aid and on our behalf, plead for true peace and authentic communion and unity. May they show us how to be, even in today’s world, docile instruments in the hands of the Lord, bent toward the needs of all to help them taste the goodness of God and to direct the whole world toward Him.

I give you my blessing.