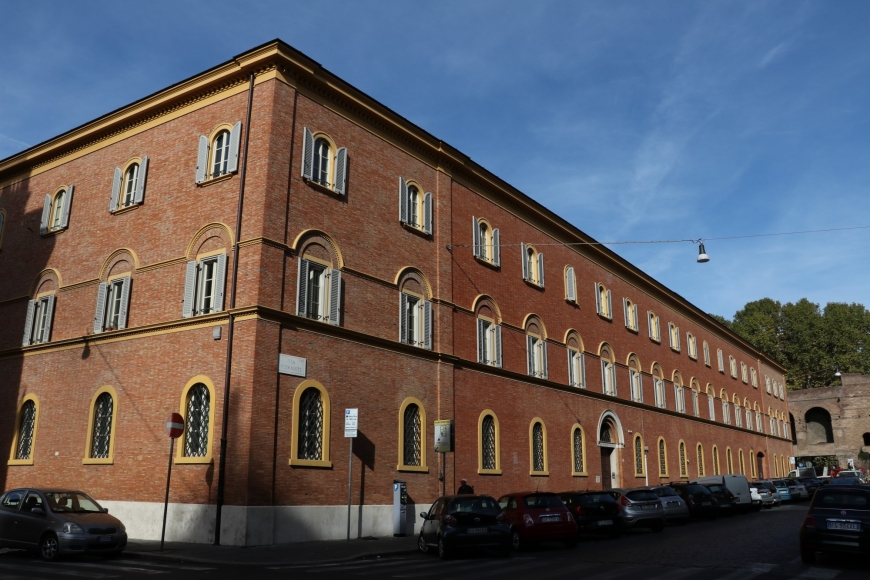 The Capuchin General Curia in Rome
Historical Sketch of a Journey

On the feast of Saint Elizabeth of Hungary in 1897, the General Minister, Father Bernardo of Andermatt [Edoardo Christen] († 1909), sent a letter to all the Provincial Ministers of the Order asking them to meet the needs of the Capuchin Poor Clare Nuns of Rome who were expelled from Corporus Christi Monastery of Monte Cavallo al Quirinale – which was their home since April 20, 1576. This was at the time of the “imprisonment” of four Poor Clare Nuns from the Monastery Saint Mary of Jerusalem – also known as the “Trentatre” – of Naples.

The Capuchin Poor Clares had permanently left the monastery of Monte Cavallo in 1887 under the blows of the suppression laws for religious orders issued by the government of the newborn Kingdom of Italy, which were soon felt in Rome after the taking of Porta Pia on September 20, 1870.

Both the monastery, established by the Confraternity of the Holy Crucifix of San Macello al Corso, (actually founded in 1574), and the church, consecrated by Cardinal Francesco Barberini on November 30, 1669, had until then resisted numerous assaults and successfully withstood the occupation of Rome by the army of the French Republic in 1798, the law of suppression of Napoleon Bonaparte after the conquest of Rome in 1810 and the short-lived Roman Republic in 1848.

The government of the Kingdom of Italy granted the Capuchin Poor Clares ad tempus a cramped shelter in a building on Via Galilei. Their hope was to return to the monastery after the upheaval. But hope soon turned to disappointment. In fact, in 1888, the year after their expulsion, the monastery of Monte Cavallo at the Quirinale, designed by Giacomo Della Porta and containing paintings and frescoes by some famous masters (Cristoforo Roncalli, Jacobino Del Conte, Marcello Venusti of Mantua) and especially appreciated and frequently visited by many popes, was completely razed to the ground.

The Capuchin Poor Clares found themselves without a home and in a more than precarious situation, because the place assigned to them was not a permanent solution but a provisional arrangement eventually due to expire. Building a new monastery, therefore, became yet another concern for Father Bernardo of Andermatt during his long pastoral ministry and leadership as General Minister of the Capuchin Franciscan Order from 1884 to 1908. 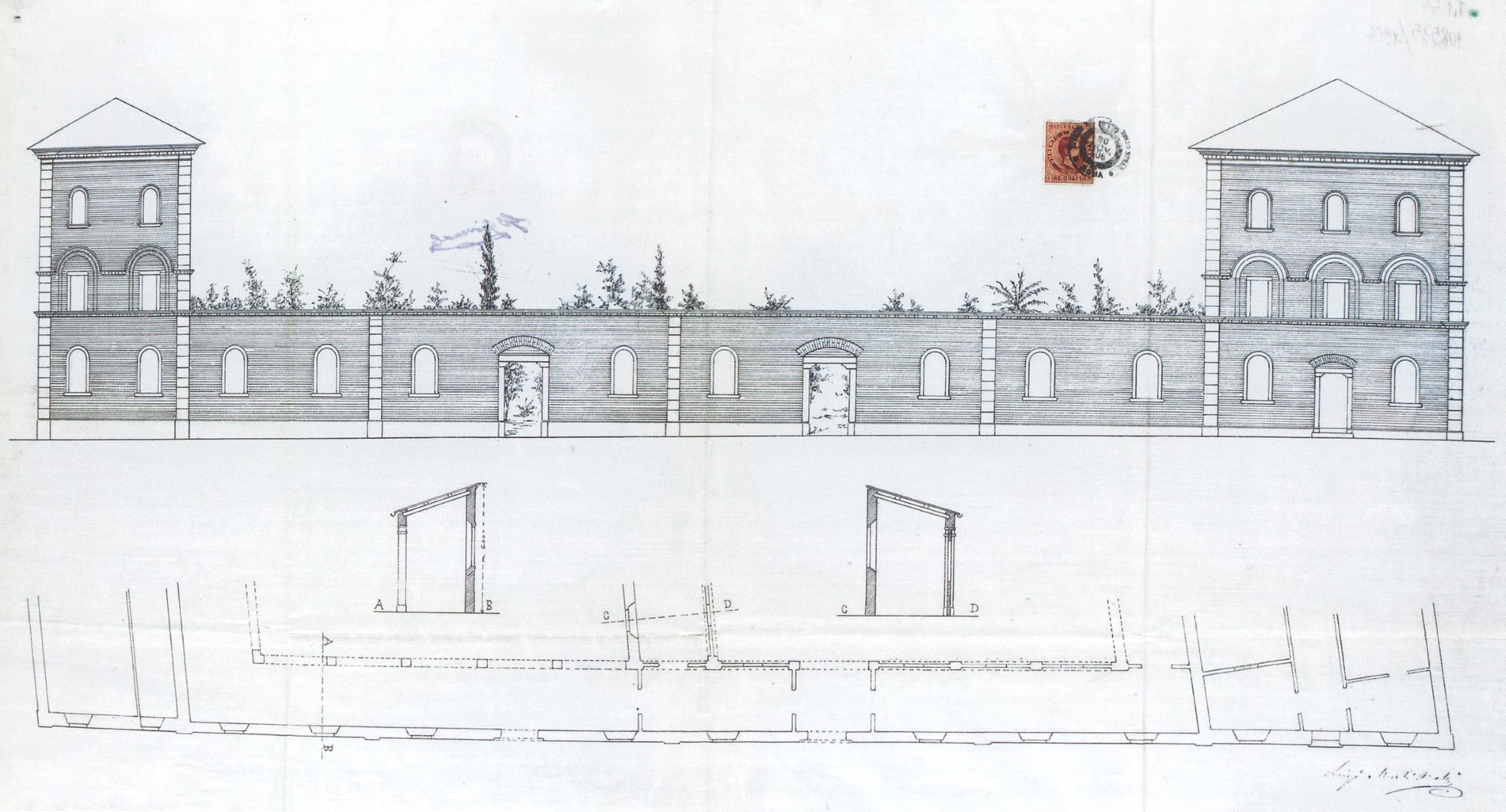 After realizing the impossibility of "regaining" the land near the Quirinale Palace where the Corporis Christi monastery once stood, the search for a place to build a new monastery ended with the allotted properties near Porta Pia, where a new Roman district was on the rise, featuring large and austere buildings capable of housing the new leadership of the newly formed capital of Italy.

Work on the new monastery, church and convent was directed by Br. Luigi da Senigallia, Capuchin Tertiary of the Province of the Marches and creator of, among other things, the stuccoes of the altar and the bas relief of the Crucified Christ among the saints.

According to accounts of the time, the structure appeared solid and elegant on the outside while its interior shone with an unmistakable austerity and poverty characteristic of the community that would have inhabited it. These reports stated that nothing was contrary to the Rule of the Capuchin Poor Clares or had even in the least suggested "some accommodation". By building a few walls, the enclosure was also safeguarded from both the prying eyes of the exterior as well as the danger of "looking out" for those inside. 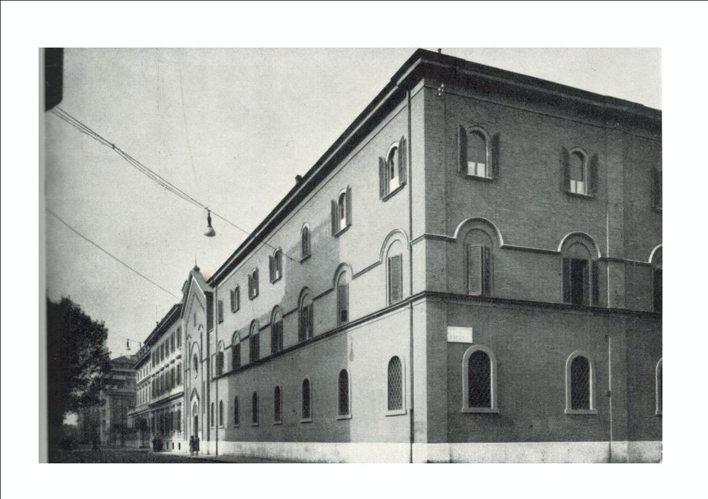 Finally, on June 26, 1907, exactly ten years after the appeal to the Minister General for a new home, the Capuchin nuns took possession of the monastery of Via Sardegna-Piemonte which preserved the ancient title: Corporis Christi.

With a solemn celebration, the Minister General, Father Bernardo of Andermatt, welcomed the nuns to the door of the church and, after pausing in adoration of the Blessed Sacrament, introduced them into the enclosure.

The Capuchin Poor Clares remained in their new home until December 1, 1950, when the then General Minister, Father Clement of Milwaukee [William Neubauer] († 1969), in anticipation of the "de-urbanization" of the International College of St. Lawrence of Brindisi and the consequent need to find in central Rome a location for the General Curia , decided on their transfer to a new monastery that would be built in the "Garbatella" district and precisely on the "Villa Pozzi" property located on a small hill at Piazzale delle Sette Chiese .

On December 2, 1950, renovation began on the former monastery of Via Sardegna-Piemonte, in order to house the General Curia of the Order. The work was entrusted to the architects Paolo and subsequently Mario Leonardi and to the Construction Society of the brothers Luigi and Pietro Galli.

The renovation work proceeded quite quickly. In addition to the reconstruction of the interior, which was necessary for the proper functioning of the General Curia, provisions of the Constitutions were observed and, according to accounts at the time, were respectful of the nature of Capuchin life "quae omnen ornatum devitat" (which avoids all embellishments) ; an extensive renovation of the Via Piemonte wing was carried out with the rebuilding and addition of a second floor, thus giving uniformity to the entire building. The entrance to the new General Curia was located in the same Via Piemonte wing.

The work being completed, on April 9, 1953 early in the morning, the Minister General, Father Benigno of Sant'Ilario Milanese [Giovanni Battista Re Cecconi] († 1974), the members of the General Curia and many friars present in Rome, welcomed at the door of the church Cardinal Clemente Micara, Protector of the Order, who, after having consecrated the altar, went to the refectory to bless the crucifix that would later be placed in that location. This was the ordinary gesture in the Capuchin tradition for moving into a new place: to plant the cross as a sign of belonging and adherence to Christ. This was followed by a solemn celebration of Holy Mass accompanied by the singing of the student choir from the College of Saint Lawrence of Brindisi. 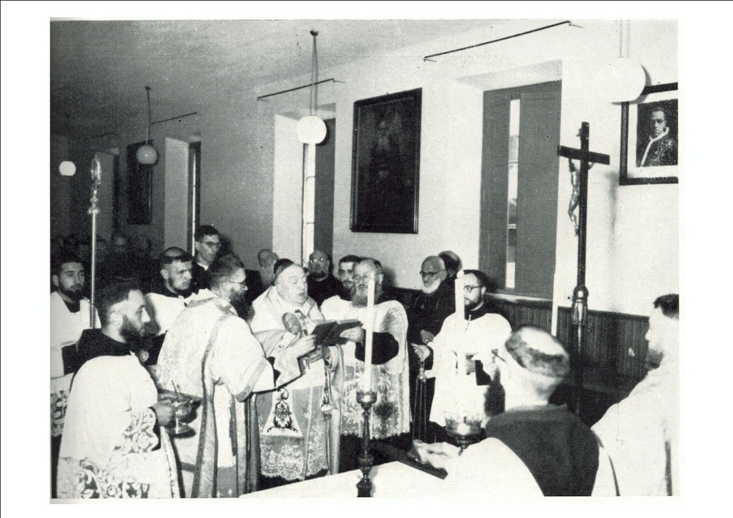 Thus the life of the fraternity of the General Curia began. The building underwent some changes little by little as was necessary in order to give more space or simply for ordinary maintenance. The Second Vatican Council and the new liturgical norms led to the restructuring of the Church especially as regards the positioning of the altar. 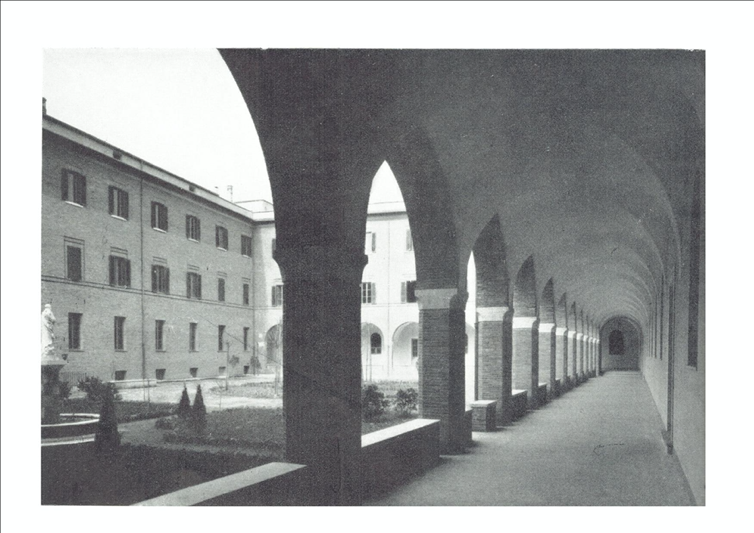 The 2006 General Chapter, while evaluating the need for renovation of some of the structures on the property housing the General Curia, recommended to the new Minister General, Br. Mauro Jöhri, a project of total renovation.

The General Definitory took the first steps of implementing the renovation project at the beginning of 2009, when the restructuring of the Church at the International College of St. Lawrence of Brindisi and of the Order's property in Jerusalem had already begun.

The idea took shape of transferring the General Curia to the current convent of the Capuchin Poor Clares at Garbatella and then subsequently to transfer the sisters to another location. It was an idea that mirrored what had already happened in 1950 when the Capuchin Poor Clares left the monastery of Via Sardegna-Piemonte to make room for the General Curia.

This scenario, first presented in a feasibility study on June 24, 2009, was found unworkable as the size of the monastery building was not sufficient enough to house the entire structure of the General Curia and, moreover, architectural and historical constraints did not allow for an expansion of the monastery itself.

Having laid this idea aside, in March 2010, the General Definitory decided to renovate the building at Via Piemonte 70, and at the same time announced a call for bids for a complete project. Three projects were presented. On June 25, 2010, the General Definitory chose the project of architect Cesare Nota Rodari who, in the following months, after considering the suggestions and directions of the general leadership, presented the revised drawings of the four floors and the terrace with the related proposals for the renovation.

In the meantime, an attempt was made to find a solution for the temporary transfer of the offices of the General Curia so as to leave the building at Via Piemonte 70 completely free. Various propositions were worked out to ensure that the General Curia would remain in the city, but none proved feasible due to insufficient space. The only place capable of containing the entire General Curia was the College of St. Lawrence of Brindisi.

After the presentation of the project, modified according to the suggestions received, other meetings followed between the architect Cesare Rota Nodari accompanied by his associates and the General Definitory, which was later joined by an ad hoc commission set up to follow more closely the preparation of the project in all its complexity.

On June 24, 2011, exactly one year after the first drawings were presented, the General Definitory approved the overall project and decided that in September, 2011 the Order would be informed of the start of the work, the timeframes and the financial resources that would have to be contributed. At the same time, the transfer of the General Curia from Via Piemonte 70 to the International College of St. Lawrence of Brindisi began.

On December 1, 2011, the General Definitory decided to commit the renovation of the building at Piemonte 70 to Manelli Construction according to the plans prepared by architect Cesare Rota Nodari and reviewed by the commission charged with following up on the work. In the following months, the bureaucratic process began of presenting the project to the relevant municipal and state authorities along with the request for the renovation’s approval.

A period of intense activity followed which saw several teams of workers, each in their own field of expertise, working intensely over thirty-two months to deliver to the General Curia of the Order of Capuchin Friars Minor the completed work by the deadline date that had already been set: June 30, 2014.

More in this category: « To remember our martyrs Death of Br. Guglielmo Sghedoni, former General Vicar of the Order »